What Doctors Can Charge You on Medicare

When you're enrolled in traditional Medicare and need to see any doctors for the first time, always ask their offices — when you call to make an appointment — whether they accept Medicare patients and, if so, whether they accept assignment. That's because their answers to these questions really affect how much you pay:

The following figure shows the very different amounts you can pay under each of these scenarios — in this example, $20, as much as $35, or $120 for a doctor visit. They show why determining what, if any, kind of arrangement the doctor has with Medicare in advance of being treated is a wise move. (Note that these scenarios apply only in traditional Medicare. If you're enrolled in a Medicare Advantage plan such as an HMO or PPO, your share of the cost is the co-pay amount that your plan charges in any particular year.) 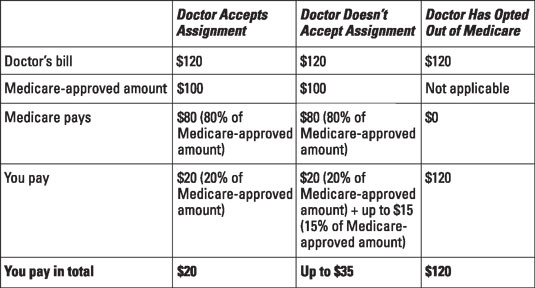 Sample costs based on a doctor's Medicare acceptance.

The regulations on assignment and opt-out apply not only to doctors, but also to other types of Medicare providers, such as therapists and medical equipment suppliers. Whichever providers you see, finding out in advance whether they participate in Medicare is time well spent.

The following discussions consider in more depth the question of how you're affected financially if you go to a doctor who's opted out of Medicare or who wants to charge a special fee for "boutique" services.

Doctors who opt out of Medicare

Doctors who opt out of Medicare must stay out of the program for at least two years. They offer what is known as direct billing, and very often they don't accept any kind of insurance. In this situation, the doctor should ask you to read and sign a document that is really a contract. In signing it, you're legally agreeing to be responsible for the whole bill, with no reimbursement from Medicare. And because Medicare doesn't cover treatment from an opted-out doctor, your Medigap insurance (if you have some) won't cover it either.

Keep in mind, though, that such a contract is with one individual doctor or doctor's practice. If you go see other doctors who do accept Medicare, their services will be covered in the usual way and a Medigap policy, if you have one, will cover your out-of-pocket costs.

Concierge and boutique are fancy names for services provided by primary care doctors who accept you as a patient (or continue to treat you) only if you agree to pay them a special fee. Patients who pay it are promised a higher level of service — for example, same-day appointments, longer visits, and more personal attention. The fee (sometimes called a retainer or membership dues) varies widely among different doctors but reportedly averages about $1,500 to $2,000 a year. Whether you think this type of arrangement is worth the money is of course a matter of personal opinion and finances. Consider concierge medicine just in relation to Medicare.

You may think that primary care doctors who offer concierge services are just those who've opted out of Medicare. Some are in that category — they're the ones that offer direct billing.

But some doctors who offer concierge care also accept Medicare patients, as long as those patients pay the extra fees. Medicare doesn't prohibit this practice. But Medicare officials warn that such doctors aren't allowed to charge fees for any services that are already covered by Medicare, or to waive the Medicare deductibles and co-pays that normally apply. Medicare's Inspector General's office has prosecuted and fined some doctors for violating these rules.

So before signing a contract for concierge services, look carefully at the fine print to see what is promised in return for the fee. For example "a full physical every year" (which Medicare doesn't cover) is okay, but a "yearly overall health assessment" (if it's no more than what Medicare covers under its annual wellness benefit) isn't. This issue has many gray areas, and only a physician (not you) can run afoul of the law. But only you, over the course of a year, can decide whether you're getting your money's worth from such a contract.