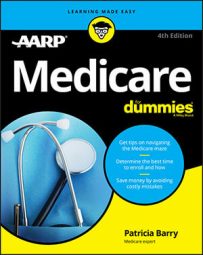 Explore Book Buy On Amazon
Part D, Medicare's program for covering prescription drugs, is a complicated benefit that resembles no other type of drug coverage ever devised. That's why understanding how it works before plunging in is really important. Following is information on the peculiarities of Part D coverage — how it can fluctuate during the year, how different plans have their own lists of drugs they cover, and which drugs are excluded from Part D and which must be covered.

Drug coverage that can vary throughout the year

It sounds crazy, but you may find yourself paying different amounts for the same medicines at different times of the year. That's because Part D drug coverage is generally divided into four phases over the course of a calendar year. Whether you encounter only one phase or two, three, or all four depends mainly on the cost of the prescription drugs you take during the year — unless you qualify for Extra Help. Here's the breakdown:

What’s more, the 50 percent that the drug manufacturers contribute to the discounts on brand-name drugs counts toward the dollar out-of-pocket limit that gets you out of the gap; that is, you get credit for having paid full price even though you’re receiving the discount. But for any discounts funded by the government, such as those for all generic drugs and anything above 50 percent for brands, only what you pay counts toward getting out of the gap.

This figure is a quick way of looking at the same cycle of coverage. 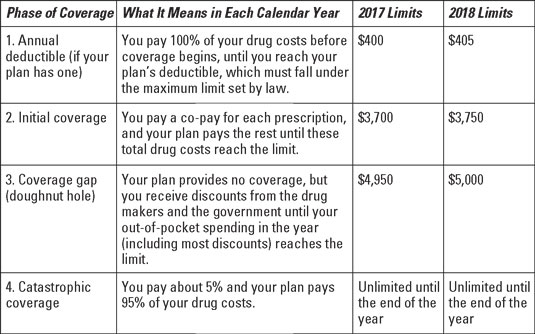 The following figure shows this information in a different way. Here, you can see examples of brand-name drugs costing (for the sake of simplicity) $100, $200, or $300 per one-month prescription — and what you'd pay for them in each phase of coverage. These examples assume co-pays during the initial coverage period of $45 for each prescription, although co-pays vary widely among Part D plans. 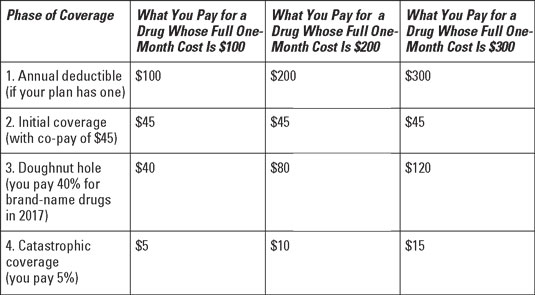 Examples of costs through four phases of coverage.

Formulary is jargon that becomes familiar when you're in Part D because it directly affects what you pay. A formulary is simply the list of drugs that each Part D plan decides to cover. (No national formulary exists.) Here's why it's important that your drugs are included on your plan's formulary:

No Part D plan covers all prescription drugs, and the number covered varies greatly among plans. In 2019, 63 percent of drugs were covered by Medicare Part D plans, according to an analysis by the health research group Avalere Health. So, the goal is to choose a plan that covers all, or at least most, of the specific drugs you take.

Although Medicare law doesn't require Part D plans to cover every drug, it does insist that each plan covers at least two drugs in each class of medications. A class means all the similar drugs that are used to treat the same medical condition. Many plans cover more than two in each class. But every plan must cover "all or substantially all" drugs in each of the following six classes: Medicare requires every Part D plan to cover pretty much all drugs in these categories because of the clinical problems that can occur when patients abruptly stop taking such medications or switch to others.

The drugs Medicare doesn't pay for

By law, Medicare doesn't pay for certain kinds of drugs. Part D plans aren't prohibited from covering them; Medicare just doesn't reimburse their cost. So although a few plans may cover some of these drugs, most plans don't cover any. The types of excluded drugs are

When drugs are covered by Part A, Part B, or Part D

As confusing as it sounds, some medications may be covered not only under Medicare Part D but also under Part A or Part B. Sometimes an identical drug may be covered by all three but charged under one or another according to different circumstances. That's because certain drugs were covered under A or B before D came into existence, and that practice continued. Here's the general rule of thumb:

Part D doesn't pay for drugs covered by Parts A or B. So if any of your meds are in question, your Part D plan may require information from you and your doctor — usually concerning any related medical treatment, such as surgery — before covering them. For this reason, Part D plans often place a prior authorization restriction on such drugs to determine whether Part A, B, or D should cover them. Your doctor may be able to settle this matter over the phone or may help you file a speedy exception request. Either way, your doctor needs to explain why a prior authorization shouldn't apply in this case.