Trade with the Trend and Get Big, Winning Trades

One of the most important advantages of trading in the direction of the trend is that when done correctly, your winning trades are much bigger than your losing trades. This advantage is stated right in the definition of the word trend — “to extend in a general direction.”

The terms extend and general direction reveal that trends are long-term moves. When trading market trends, you’re making money on the long-term moves of the market and, therefore, making large profits.

The potential for large profits in trend trading is due to the price structure of a trend itself. The market tends to make bigger moves (covering more price range) and spend more time in the direction of the trend than it does during the correction phases against the trend. 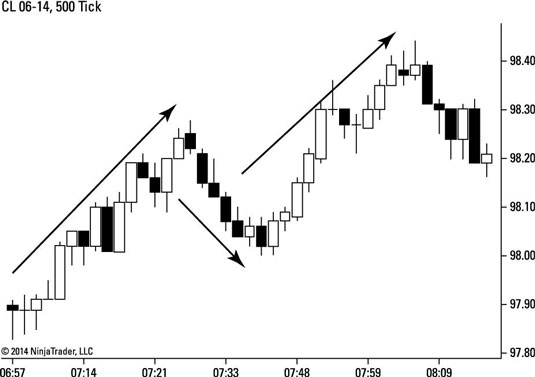 Having some losing trades is inevitable. At times, you’ll even have a significant series of losing trades (such events are called drawdowns in the trading community). Drawdowns are normal and expected.

The important factor in being able to successfully weather these natural drawdowns is to keep your losing trades smaller than your winning trades. Trend trading, by its very nature, is designed to help you do that.