Why You Should Trade with the Trend

The rationale to trend trading is if the market is already moving up, it’s given at least some evidence of its bullish bias so it makes sense to follow that.

For this reason, trend trading is also called “trend following” because instead of guessing which way the market is going to move, you wait for it to establish a direction. After that’s clear, you simply jump onboard and follow the trend that has already begun.

“An object in motion tends to stay in motion” is part of Newton’s first law of motion. You can certainly argue that such a law of physics doesn’t directly apply to the financial markets. However, when large financial institutions managing enormous amounts of money make a commitment to a market, that market will indeed often continue in that direction.

Such institutions aren’t able to bring all of their financial power into a market at one time without disrupting the pricing structure of that market. In other words, if they were to use all of their buying power at once, it would create such a demand versus supply imbalance that the price of that market would skyrocket.

The institution would have to pay exponentially higher prices as the asks evaporated and the bids moved up in an almost parabolic fashion.

Everyone wants to buy at as low a price as possible, so institutions leg into a position slowly over time in an effort to hide their intentions and keep the prices they have to pay for that market low.

Identifying a trend is one of the easiest chart patterns to recognize. You can clearly look at a chart and see whether the market is moving up or down. As opposed to more sophisticated and complicated chart patterns, a trending market is the easiest pattern to spot.

Trend trading is also simple for traders. In assuming you’ve correctly identified a long-lasting trend, there isn’t much for you to do after you’ve entered the trade. Trends are long-term moves, so the best thing you can do as a trend trader is to hold tight and enjoy the ride. You don’t need to micromanage the trade.

Trends can make you more money

Trend trading is a good style of trading, not only for its simplicity but also for its profitability.

To evaluate the effectiveness of your trading, measure the following ratios:

Because trends are long-term moves, the rewards of successful trend trades are much bigger than the amount of risk taken on the trade. This is good for you both financially and psychologically.

The psychology of trading is a vital aspect to being successful. Losses can be hard to take and can create a distressing emotional state in which it’s hard for you to trade with a clear mind. On the other hand, the perfect trade method doesn’t exist, so all trading methods experience losses. How you mentally handle those losses is a vital part of determining whether you’ll survive and thrive as a profitable trader.

The figure illustrates an example of the small risk compared to the potential large reward of a successful trend trade. 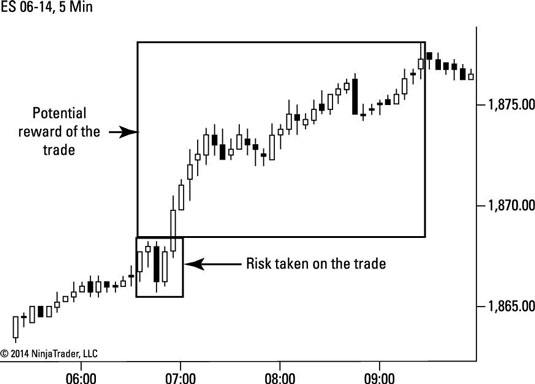