Stock Charts: Reading and Using Your Chart Line by Line

By: Greg Schnell and Lita Epstein and
Updated: 03-12-2018
From The Book: Stock Charts For Dummies 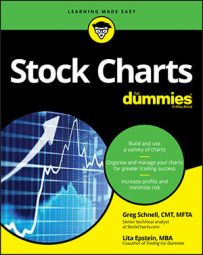 Explore Book Buy On Amazon
Line charts communicate a stock’s price action very quickly and simply without any significant detail. One of the key benefits of line charts is that they don’t show intraday extremes that may or may not be outside a trading range.

As a long-term investor, you want your price chart rising from bottom left to top right. That means the stock is rising in price over time. As a short-term investor staying in a stock for weeks or months, you still want the same price action, but you’re looking to exit before the long-term investor does.

These concepts can be important when you’re using line charts as well. Support/resistance areas help you define points of interest on the chart. You can draw support and resistance areas easily on a line chart because they are so clean and simple. The image below shows you how to use horizontal support and resistance lines to find the key trends. In addition to horizontal lines, you can also see places where trend lines that slope can be placed.

This image shows closing prices for Tesla (TSLA) from January 2014 to June 2017. From Tesla’s April 2016 high to its December 2016 low, the sloped resistance line shows you how the price steadily moved lower at each top. These sloped lines are sometimes referred to as trend line resistance. When Tesla finally found support around $185–$188, it bounced through the trend line resistance and surged all the way up to the next level of horizontal resistance around $285.

New investors first starting to use charts seek to answer these two critical questions that don’t seem intuitive: Those are both good questions, and line charts can help answer them.

When price is breaking above former resistance levels or price is falling and there are previous support levels nearby, chartists will use these critical points on the chart to assess whether or not the stock should be bought or sold to maximize profits.

An example of buying at higher prices would be buying Tesla in April 2017 as it went to $290, which was a new high above $285. Everyone who owns the stock is profitable, and the price is moving to higher highs. Why would an investor sell a winner he already owns that continues to keep on winning?

Because most investors won’t sell, there is less supply. Those who want to get in to the winner stock create more demand, which makes the stock continue to move higher. The stocks that make new highs usually start by making one new high and then continue to make new highs for a while. This critical point just above resistance on a chart is a good profitable area to watch.

In the event of price moving below support, you don’t know where it is going to stop next. In this image, Tesla fell below support in February 2016. Everything on the right side of the chart after February 2016 was unknown at that time. Tesla continued to fall another $40 down to a level that was support in 2014. By selling near $185 (the support level), you can save a lot more pain by taking some losses. In this case it worked out, and Tesla rebounded. That is not always the case. If you choose to sell when a stock breaks its support level, you can still buy the stock again at some point in the future, perhaps when it is trending higher instead of lower.

Using line charts with horizontal support and resistance lines as well as trend lines can really improve trading results because they help you find the critical price moves.