By: Amine Bouchentouf and
Updated: 04-21-2020
From The Book: Commodities For Dummies

Because banks provide the necessary liquidity and credit availability for the global economy to function, the disruption in the banking system disrupted commodities markets, capital markets, and the real economy. What started as several delinquent accounts in a subsection of the real estate market ended up disrupting the world economy — and, with it, prices for everything from crude oil and aluminum to corn and soybeans.

As the darkest days of the crisis began to subside, the U.S. government (followed by governments around the globe) took unprecedented steps to try to stabilize the financial system. These actions included nationalizing the banks, a step so foreign in America and so incompatible with American values that many were abhorred by the government’s intervention in the private sector. 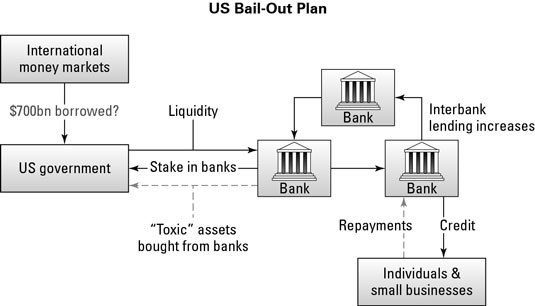 Other governments also took steps to contain the crisis around the world. Iceland opted for nationalization by having the government own the banks, and Ireland, Spain, Greece, and Germany guaranteed deposits. Russia chose extra government funding, whereas Australia cut interest rates.

You need to be familiar with the events of the 2008 global financial crisis (GFC) because they’ve had a major impact on the economy in general and commodities in particular. If you’re interested in researching the root causes of the crisis, and for more information on the GFC and its aftermath, check out the following books:

Sometimes even the greatest risk-management techniques can’t replace common sense. Many industry practitioners claim that 2008 was an unforeseeable event, one that occurs only every generation or century.

However, many industry insiders who followed the markets closely applied common sense and saw that the real estate sector was in a bubble. Investors shrewd enough saw that this housing bubble was going to have a ripple effect across asset classes because many assets were now interlinked through complex derivative instruments.

Those astute investors were able to appropriately manage this risk and position their portfolios to actually benefit from this event. John Paulson, the hedge fund manager of Paulson & Co., was able to manage the housing bubble risk and handsomely benefit from the downturn, returning more than 570 percent in 2008 while most other financial institutions were hemorrhaging billions of dollars in losses.

Therefore, with the right judgment, analysis, and approach (and, yes, a little bit of luck), the astute and wise investor can still successfully navigate even this large-scale risk.