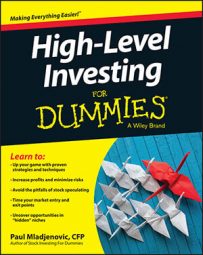 The best way to see an inverse exchange-traded fund (ETF) at work is through an actual example. The figure offers a chart of oil (the crude oil price as per the electronic NYMEX futures market) and how it performed in 2014. Added to the chart is an inverse ETF, the United States Short Oil Fund (DNO).

The figure indicates the full year's price movement of both. The percentages on the right tell you the magnitude of the price differential movement. 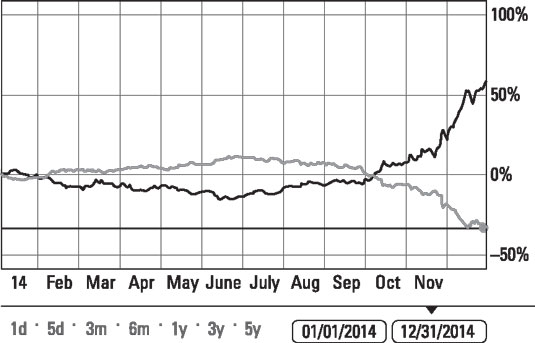 The price of oil versus an inverse oil ETF.

Technically, DNO is inverse or opposite to the movement of the spot price of crude oil. However, this particular index tends to correlate very closely to the price of oil, so to keep the example simple, charting oil prices will suffice.

The divergence is very clear. Throughout 2014, the price of oil (the gray line) and the inverse ETF (the black line) moved in almost perfect negative correlation. During the first half of 2014, oil was moving upward while DNO reacted by doing the opposite (it moved downward). If you were bearish on oil during the first half of 2014, you would've lost money, especially in DNO.

Then what happened? At mid-year, there was definitely a reversal of fortune. Oil starting going down steadily and then plunged during the last quarter of 2014. Oil was at $86.67 (per barrel) on January 2. It hit its high for the year at around $97 on July 1. On December 31, oil closed out the year at a price of about $56. The second half of the year was a great time for oil and gas consumers, but the bullish oil speculators definitely needed lots of aspirin and antacids.

Had you bought DNO on January 2, you could have bought it at just under $36 per share. By July 1, it would have hit about $31. So by mid-year, you would've seen DNO's price tumble by $5 per share — a loss of roughly 14 percent. However, oil then took a drastic downward turn. Your inverse ETF would head upward; on December 31, it was just over $56. DNO continued its volatile ride into 2015 and was as high as $74 in August 2015.

If during the second half of 2014 you had put on a trailing stop and made it a good 'til canceled (GTC) order, you would've had a good chance of getting out somewhere near that $29 high and bagging a good profit.

During early 2015, after the price of oil hit the $40-ish price range, it stabilized, and by June 2015 it was in the $60 area. Those gutsy speculators who put on bullish oil trades (such as buying oil long ETFs or ultra-long ETFs) could have more profits as the price of oil rallied.

Think about how a nimble speculator could've played oil's roller coaster ride from early 2014 to mid-2015. If you acquired a bullish ETF in early 2014 and rode up with oil's modest rally, you could've exited with a profit in mid-2014. Then you could've switched to a bearish ETF and continued profiting in the second half of 2014 as oil plummeted. Then when oil showed signs of stabilizing in early 2015, you could've gotten out of your inverse (bearish) ETFs and subsequently switched into bullish ETFs again. You would've profited handsomely three times.

Yes, that's easier said than done, and hindsight is indeed 20/20, but the preceding scenario wouldn't require a crystal ball. It would require some discipline, research, diligent monitoring of oil's market fundamentals, and looking at the price action. Intermarket analysis and technical analysis would definitely help!