To successfully invest in oil, you need to understand that the bulk of future demand is expected to come from developing countries, and you need to identify where the oil will be coming from to satiate that demand.

Saudi Arabia is the world’s largest producer and exporter of crude oil and a vital player in the global oil market. But the country is also heavily reliant on crude oil to produce its own energy, and its needs are growing.

It uses oil for more than 50 percent of its energy needs, and demand for it has tripled since 1990 with no signs of slowing down, as you can see in this figure. In the time Saudi Arabia’s consumption has surged more than 200 percent, its production has grown only 27 percent.

This increase in domestic consumption is leaving a growing gap in oil available for export, which means investment opportunities for new sources of production will abound. 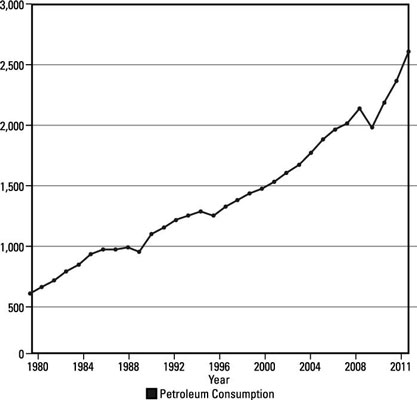 In addition to demand growth in exporting nations, rapid increases in oil demand from developing nations will lead to numerous oil investment opportunities on the supply side. Demand in India has grown 60 percent since 2000 to more than 3.4 million barrels per day, yet it produces fewer than a million.

China’s demand has grown 82 percent in the same time. It now consumes about 9 million barrels of oil per day but produces only 4.3 million. The bulk of future demand is expected to come from developing countries like these, and identifying where the oil will be coming from to satiate demand is one of the surefire ways to successfully invest in oil.