Paying For College For Dummies

Explore Book Buy On Amazon
Plenty of studies and analyses show that those who have more education generally enjoy lower rates of unemployment and higher employment income. The graphic in the following figure clearly shows that those with higher levels of education reap considerably higher wages from work and lower unemployment rates. 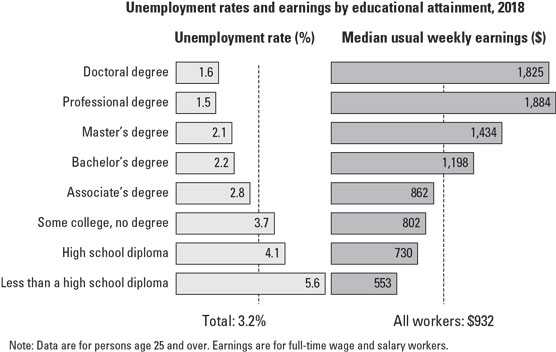 What higher education means for earning higher wages and having lower unemployment.

There’s no question that education is a good thing and can develop your brain, critical thinking skills, interpersonal skills, etc. What jumps out at me from the graphic is that it looks like there’s value in completing high school, completing college if you’re going to attend and possibly considering an advanced degree. But that doesn’t mean that all education, or formal education is worthwhile regardless of the cost. You should always consider the expected cost versus benefit or the return on the investment since attaining a college degree takes a good deal of time and money.

Another important point about the figure: the “income premium” associated with college (compared with a high school degree) peaked in the year 2000 and declined about 10 percent over the next 15 years. College costs of course continued rising rapidly over this period further undermining the potential value of a college degree.

Parents and families should also be aware of the research report titled, “Is College Still Worth It? The New Calculus of Falling Returns” by William R. Emmons, Ana H. Kent, and Lowell R. Ricketts published by the Federal Reserve Bank of St. Louis Review, Fourth Quarter 2019. That report found:

“The college income premium is the extra income earned by a family whose head has a college degree over the income earned by an otherwise similar family whose head does not have a college degree. This premium remains positive but has declined for recent graduates. The college wealth premium (extra net worth) has declined more noticeably among all cohorts born after 1940. Among families whose head is White and born in the 1980s, the college wealth premium of a terminal four-year bachelor’s degree is at a historic low; among families whose head is any other race and ethnicity born in that decade, the premium is statistically indistinguishable from zero. Among families whose head is of any race or ethnicity born in the 1980s and holding a postgraduate degree, the wealth premium is also indistinguishable from zero. Our results suggest that college and postgraduate education may be failing some recent graduates as a financial investment.”

Clearly, there’s likely to be value in completing a college degree and getting a degree from a program with a good reputation and track record for graduates with that type of degree. Conversely, those who don’t complete their degree or who get a degree from a program with a subpar or mediocre track record will probably get a poor return on their invested education dollars.

Successful people who never got a college degree

And there are plenty of lower profile people who have done quite well for themselves without a college degree including some plumbers, landscapers, dental hygienists, MRI technologists, commercial pilots, physical therapist assistants, respiratory therapists, air traffic controllers, transportation inspectors, diagnostic medical sonographers, electricians, construction managers, licensed practical nurses, web developers, elevator installers, radiation therapists, massage therapists, medical assistants, firemen and police officers. I chose to highlight some of these occupations because they are populated with relatively high numbers of people without a college degree.

Now, this is not in any way to suggest that the majority of people or your kids should bypass college! Each person’s situation is unique and different. But the point is that there are many paths to career success and some of those paths include going to college whereas others do not.

Eric Tyson is a veteran Dummies author of numerous bestselling books in the investing and personal finance space.

Paul Mladjenovic is a Certified Financial Planner and the bestselling author of Stock Investing For Dummies.

Kiana Danial is an investment consultant and trainer and the author of Cryptocurrency Investing For Dummies.

Russell Wild is the author or coauthor of nearly two dozen books, including ETFs For Dummies.

Matt Krantz is a nationally known financial journalist and the author of Online Investing For Dummies.

Robert Griswold is a successful real estate investor and property manager and the co-author of Real Estate Investing For Dummies.

Steven Gormley is a celebrated expert in the legal marijuana sector and author of Investing in Cannabis For Dummies.

Brendan Bradley is a financial market professional and the author of ESG Investing For Dummies.