What Is Pool Mining?

By: Peter Kent and Tyler Bain and
Updated: 03-04-2020
From The Book: Cryptocurrency Mining For Dummies

Explore Book Buy On Amazon
Pool mining is a group of miners acting as a team to find blocks. The block rewards are proportionally split across all miners who contributed to the pool’s hashed Proof of Work; that is, the more hashing power you provided to the operation during a particular time period (the pool mining duration or mining round), the higher the share you receive for block rewards won by the pool during that time period. (More specifically, there are a number of different ways that shares are calculated, but in general you are rewarded according to the proportion of the hash power you provide to the pool.)

Typically, the mining duration or mining round is the period of time between blocks mined by the pool. That is, a round begins immediately after the pool has won the right to add a block to the blockchain and stops when it adds a block to the block chain the next time. The round can range anywhere from a few minutes to many hours depending on the pool size and the pool’s luck.

Regardless of the hardware you plan on mining with or the cryptocurrency you end up choosing, there is a mining pool for you. Whether you have cryptocurrency application specific integrated circuit (ASIC) hardware, a graphical processing unit (GPU) mining rig, or just a typical desktop computer with both a central processing unit (CPU) and GPU onboard, pool mining is the best method of consistently earning mining rewards for small operators.

Mining pools provide a way for the small operator to get into the game when his or her processing power is so low that solo mining simply isn’t practical. You can also use mining calculators, web pages into which you enter your hashing power, and in return get a calculation of how profitable mining a particular cryptocurrency would be, and how long it would take to mine your first block.

These calculators simply work on a statistical calculation based on the various numbers; the overall network hash rate (that is, the combining hashing power of all the computers mining that cryptocurrency), your level of hashing power, how often a block is mined, the block reward, and so on.

Well, for most small operators, these calculators can be a shock. You may discover, for example, that mining bitcoin using your paltry processor, will, statistically speaking, result in your first block being mined ten years from now. In other words, solo mining simply isn’t practical for you. In such a case, if you really want to mine bitcoin, you have to join a pool.

Mining pools are also very simple for the user to use, by design, and take a lot of the technical details and headache out of the mining process. Mining pools provide a service to individual miners, and miners provide hash rate to pools.

Different pools use different methods for calculating payouts. Each mining pool’s website will provide information about which payout methods it uses and will go into deeper detail on how they specifically implement them.

The following list shows a few of the most popular payout-calculation methods. The premise of these methods: miners are paid a proportion of the gains made by the pool over a period of time. That period of time is known as the mining duration or mining round.

For example, take a look at Slush Pool’s mining results. In the image below, on the right side, you can see how long the current round has been operating, and the length of the average mining round (1 hour 39 minutes). 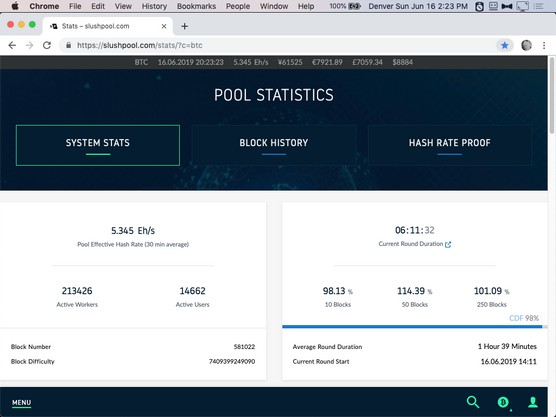 The statistics page at Slush Pool, showing information from the current mining round (or mining duration).

Say that you provide that proportion of the hashing power during the mining round; you will earn 0.0068 percent of the payout from that mining round (after fees have been taken out by the pool operator).

Your hashing power may not have been involved in the actual winning blocks (perhaps your computer was operating at times when the pool did not win the right to add a block, for example), but because you provided hash power during the mining round, you earn your proportional payout.

Payout calculations are often (as everything in cryptocurrency mining is!) more complicated than a simple proportional payout. The following list describes a few popular methods for calculating mining pool payouts. The term share refers to the proportion of the total hashing power during the mining duration that your mining rig contributes to the pool.

Each of these payout methods were conceived and deployed in an attempt to maintain fairness between pool operators and in pool mining reward distribution to the individual miners contributing to the pool. Some are more successful than others. However, overall, they all have aspects of impartiality that balance the playing field for all the miners participating in the system.

One aspect that is often overlooked when selecting a pool to contribute your hash rate and mining power to is pool ideology. Ideology can be a tricky concept to nail down, especially when businesses are involved, and that’s what mining pool operators are: for-profit businesses.

Some are benevolent actors, and some have ulterior motives beyond mining reward and revenue. Some pools have historically attempted to undermine the cryptocurrencies they support. This can be seen in mining pools mining empty blocks in an attempt to game transaction fee rewards, clog transaction throughput, and push alternative systems.

Other mining pools have used their hash rate and influence to stall updates to the system or instigate and propagate forks of the blockchain they are mining. There is no tried and true or easy way to measure mining pool ideology.

However, community sentiment and historical actions are often a good barometer to measure if a mining pool is acting in a way that supports the wider ecosystem. The best way to sift through mining pool ideology is to stay up to date on cryptocurrency news, and to peruse online forums, such as BitcoinTalk.org, or social media sites like Twitter or Reddit.

Overall, ideology is less important of a factor when considering pools compared to mining reward process and pool fees. After all, cryptocurrency is an incentive-based system, and selfishness drives the consensus mechanisms and security of the various blockchains.

Another important factor in pool selection is pool reputation. Some mining pools propagate scams and steal hash rate or mining rewards from users. These types of pools do not last long as news travels fast in the cryptocurrency space and switching costs for pool miners are very low, making it easy for users to leave pools that cheat miners.

However, despite this, there have been many examples of mining pool and cloud mining service scams. Some of the more noteworthy historically have been Bitconnect, Power Mining Pool, and MiningMax.

The best way to detect a scam may be the old-fashion mantra “If it sounds too good to be true, it probably is!” (Strictly speaking, Bitconnect wasn’t a mining pool, but it was a service that promised returns on a cryptocurrency investment.)

A bitcoin investor could lend bitcoin to Bitconnect and in return earn somewhere between 0.1 percent and 0.25 percent per day … yep, up to doubling his money each month. Of course, many investors never go their money back from this Ponzi scheme.)

Reputation in the cryptocurrency mining industry is hard to gain, but very easy to lose. For this reason, many of the pool operators functioning today that have acquired large hash rate percentages on the cryptocurrency networks they support are not scams. If they were in fact scams or illegitimate actors in the space, enterprising miners would have already switched to a better pool.

This doesn’t always apply to cloud mining operators, as the switching costs for cloud mining contract purchasers are much higher, so this doesn’t mean you can let your guard down. Vigilance and due diligence are a must and highly recommended in this space.

How do you check on a pool’s reputation? Check the mining forums and search on the pool’s name to see what people are saying about it.

Pool percentage of the total network

How does the percentage that a pool holds of the overall network hash rate effect you? After all, a large pool is going to take a larger proportion of the money being made from mining than a smaller pool.

That’s correct, but it shouldn’t, over time, affect how much you earn. Here’s why. Remember, the network hash rate is the number of hashes contributed, by all miners and all pools, to mining a block. Depending on the cryptocurrency, it may take quintillions of hashes per second, for perhaps ten minutes on average, to mine a block (that pretty much describes bitcoin mining, for example).

So, you have all these machines, thousands of tens of thousands of them, hashing. Who is going to get to add a block to the blockchain? That’s a factor of the amount of hashing power provided, in combination with luck…chance. That means that the miner or pool that gets to mine the next block is very hard to determine.

It may be the pool that contributes more hashing power than any other pool or miner; but there’s chance involved, too, so it could be the miner with the tiniest contribution in the entire network. It probably won’t be, but it could be. That’s the way chance — probabilities — works.

Think about it like a lottery. The more tickets you have, the more likely you are to win…but you might win if you only have one ticket. Chances are you won’t … but it could happen.

Over the short term, then, it’s impossible to predict who is going to win the hashing contest, or even, over a few mining rounds (or even a few hundred mining rounds), what proportion any pool is likely to win.

Here’s another analogy: It’s like tossing a coin. What percentage of coin tosses are heads, and what proportion are tails? Over the short term, it’s hard to tell. Toss twice, and it’s entirely possible that it’s 100 percent one way or the other. Toss ten times, and it’s still unlikely to be 50:50. But toss a thousand times, and you’re going to get very close to that 50:50 number (assuming clean tosses of a balanced coin).

All right, back to the question: Should you go with a big pool or a small pool? A big pool, over time, will win more blocks than a small pool. But, of course, you’re going to get a smaller proportion of the winnings than you would in a smaller pool.

There is one difference. The larger the pool, the more frequently you’ll earn a cut. That means more frequent earnings than from a smaller pool. Those earnings will be smaller, though; you can’t beat the math. You’re not going to earn more than your percentage of the earnings represented by your percentage of the hash rate. (Over the long term, that is; over the short term, you might earn considerably more or considerably less, which ever choice you make.)

So you might to like to go with a larger pool just so you see income more frequently, but don’t expect picking a larger pool to increase your earnings…long term.

How do you find the relative size of the pools? Many sites provide this information often in the form of pie charts. Check out this historic graphical view of network hash rate percentages by pool on the Bitcoin network. 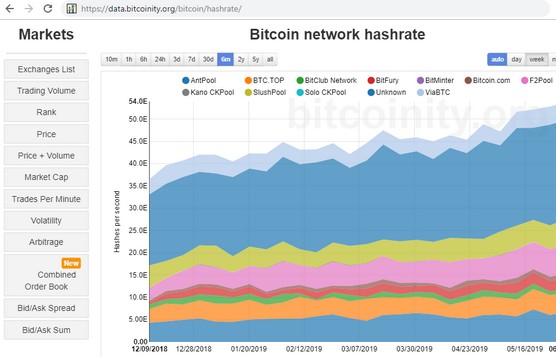 A historical graph of each pools hash rate contributions to the Bitcoin network over six months.