Tips for Putting Together Press Releases for Your Food Truck Business

Explore Book Buy On Amazon
One of the best ways to promote your mobile business is to issue press releases to your local media. You can distribute most of your press releases by email or through online distribution services, such as PRweb or PR Newswire, to editors at newspapers, magazines, radio stations, and television stations. Using distribution services may lead to your news getting syndicated by all your local or regional media outlets.

If you plan to regularly send out press releases, you must be aware of the standard format that these media sources use and accept. Include the following elements in every release you write:

A striking headline must communicate your subject matter instantly and convey why the content is new and interesting. It must grab the reader’s attention by creating curiosity while specifically defining the information provided in the rest of your press release.

Check out the sample press release , which provides a story with quotes that journalists can use as the background of a longer story. 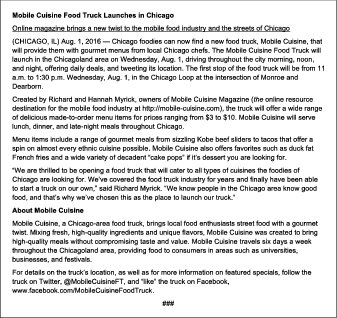 Here are a few handy guidelines for writing a press release:

This is just a general set of guidelines for press releases; for more detailed information, pick up a copy of the latest edition of Public Relations For Dummies, by Eric Yaverbaum, Ilise Benun, and Richard Kirshenbaum (published by John Wiley & Sons).