How to Use Reward-Based Crowdfunding in Your Business Plan

By: Steven D. Peterson and Peter E. Jaret and Barbara Findlay Schenck and
Updated: 08-26-2016
From The Book: Business Plans Kit For Dummies 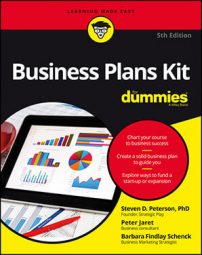 Explore Book Buy On Amazon
Reward-based campaigns are the ones that have been around the longest and could be a useful part of your business plan. For years, they’ve been providing a financial lift-off for businesses that can’t qualify for bank loans and whose owners can’t call on deep-pocketed family and friends to fill the start-up coffers until product sales can cover business costs. Instead, popular crowdfunding platforms like Kickstarter and Indigogo enable businesses to make a broad-reaching appeal for funds, rewarding those who pledge money with perks, rewards, products, or services.

The sites require you to make a concise and engaging funding request accompanied by an offer of interest to those being solicited (a record or concert tickets from an entertainer, for example). Plus, you have to follow the model of the funding platform you choose to use. Some platforms are all-or-nothing, meaning no contributions are accepted unless a minimum pledge level is reached.

All platforms collect a small percentage of funds received as their hosting and processing fee, and nearly every successful effort begins with strong momentum from an impressive groundswell of first-day contributions, usually from friends, family, customers, and Facebook followers. For example, the Nikola Tesla museum project raised more than a million dollars in the first 9 days before going on to meet its full 45-day campaign goal.

Among the most successful reward-based crowdfunded campaigns are a number of names you likely know:

Exciting as these examples are, realize they’re indicative of what’s possible but not of what most crowdfunded campaigns can expect. More typical is the success story of a documentary about medical aid in Haiti, which surpassed a $1,500 crowdfunding goal by raising $3,500 from friends and friends of friends, who form the profile of most small-scale crowdfunding contributors.

Before you start making your list of rewards and planning your crowdfunding appeal and video, here are some statistics from the 2015 Crowdfunding Industry Report to help you base your funding expectations in reality:

Peter Jaret is a frequent contributor to The New York Times, Reader’s Digest, and AARP Bulletin.

Barbara Findlay Schenck is a nationally recognized marketing specialist and the author of several For Dummies books.