By: Paul Mladjenovic and
Updated: 03-26-2016
From The Book: Micro-Entrepreneurship For Dummies 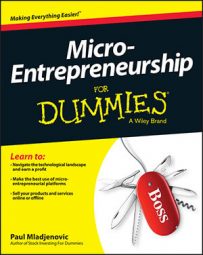 Many successful micro-entrepreneurs run home-based businesses. If you are considering what type of micro-entrepreneurial business you can start from home, consider the following the following categories. When making a decision about what home-based business you want to start, remember that when people decide to buy from you, they’re deciding whether to buy from you or your competitor — so keep your personal skills and qualities in mind.

Problem solving as a home-based business

For instance, consider the headline “13 million adults in America are illiterate.” The public reads that headline and sees a problem. Entrepreneurs see that same headline and think of the opportunities it presents.

When the world perceives you as an expert at solving a particular problem, marketing is much easier and getting clients is much easier.

To create a successful home-based micro-entrepreneurial business, you can look at trends and offer releated products or services. You may think that you can’t readily forecast or see a megatrend coming, but all you need to do is see what megatrends are unfolding right now before your eyes and do some common-sense analysis of wants and needs that would logically arise from those trends in due course.

A megatrend is a development that involves millions of people (or entire countries) and impacts social, economic, technological, or political change. This change is deep-seated and usually lasts for years and possibly decades. Those with foresight and planning can make a fortune by anticipating the wants and needs of people as megatrends unfold.

Imagine for a moment that you’re looking at the cover of Time magazine’s “Man of the Year” issue from 1982. That year, Time couldn’t think of any man or woman, so it named a “thing of the year” — the computer.

In that same position, you as a nimble micro-entrepreneur, might consider these ideas and their potential:

Eye former or ongoing megatrends to create a home-based business

While other businesses are competing in markets in the here and now, forward-thinking micro-entrepreneurs can prepare for opportunities that come tomorrow. Some examples of past (and/or still ongoing) megatrends include the following:

Create a home-based business by combining former and anticipated megatrends

You can combine the previous two sections and launch a business that solves a problem and also anticipates megatrends. You then have two powerful factors helping you make money.

Years ago a micro-entrepreneur did this very thing. It was 1997 when he took a class on zero-cost marketing. He was an affiliate to a program that helped bankrupt consumers gain credit cards. At the time, 1997 was the first year the United States had total bankruptcies of one million or more.

He marketed a program that both solved a problem (gaining credit) and was a megatrend. That business generated seven figures in revenues, and it was only a website!

Paul Mladjenovic is a certified financial planner, micro-entrepreneur, and home business educator with more than 25 years' experience writing and teaching about financial and business start-up topics. He owns RavingCapitalist.com and is also the author of Stock Investing For Dummies.