Salespeople Are Everywhere — Even Where You Least Expect Them 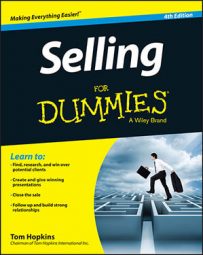 The person who isn’t selling isn’t living. Think about that: At some point nearly every day, you’re involved in a selling situation of some sort. You may call it by a different name or not even recognize it as an act of selling, but, all the same, selling it is. Here’s just a short list of the people who sell things and whose “products” you buy:

You’re not immune from selling situations in your daily life — even if you don’t come into contact with professional salespeople — and you may not even be aware that selling has occurred.

Tom Hopkins is the epitome of sales success. A millionaire by the time he reached the age of 27, he is now chairman of Tom Hopkins International Inc., one of the most prestigious sales-training organizations in the world.