How to Mine Your Six Sigma Data for Insight

Data mining is just what its name implies — it’s the labor of digging and sorting through Six Sigma data for clues to where the improvement gems may lie. Sometimes you have to go through a lot of dirt to find the gems. Searching for clues in data is not much different.

Where do you begin your search for improvement gems? And what are the tools of the trade? Six Sigma practitioners have refined the data mining process to an efficient, powerful set of tools.

A world of potential data exists all around you. Consider things such as

One way to immediately tap into this cache of information is to simply begin to observe all the potential input and output variables in your improvement project and record them.

Thinking about, pondering over, and probing your recorded observations is a proven path to increased understanding. In Six Sigma, these activities are called observational studies. Observational studies revolve around analyzing the variation in the observed critical output or outputs and investigating which input variables that variation is linked to. What you’re looking for are potential sources of the variation.

To study whether an observed input has an effect on an observed output, you create a set of box and whisker plots of the critical output, with each box and whisker plot corresponding to a different condition of the input variable. Several computer programs — including Minitab, JPM, and Microsoft Excel — automatically create these plots (see Part V).

What effect does the processor (X4) have on the items per hour output (Y)? 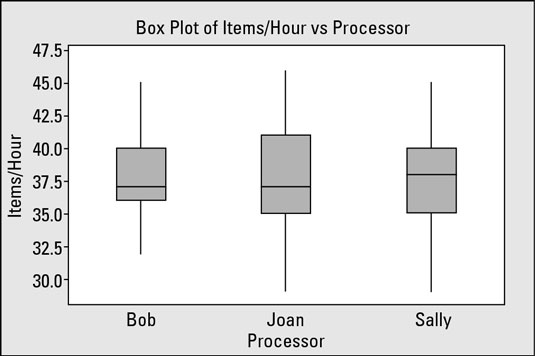 If the between group variation is large compared to the within group variation, they conclude that the investigated variable does indeed influence the output. The box and whisker method is just a simple, intuitive way to accomplish the same thing while bypassing all math and technicalities.

What about the department performing the transaction (X3)? Does it contribute to the output?

Another way to perform observational studies is through correlation calculations. These calculations give you the same insight but aren’t graphical, so they’re harder to use and interpret.

Many other tools are at your disposal when performing observational studies, including the following:

Each of these additional observational studies is available in most off-the-shelf Six Sigma software packages (see Part V). This accessibility makes performing these analyses automatically much easier, giving you a big advantage over your predecessors.