How to Connect Quality to Variation with Six Sigma

Simply changing a company’s belief system — its philosophy — from a goal post quality mentality to a Six Sigma “on target with minimal variation” mentality immediately and naturally begins to alter the behavior of employees for the better.

Whatever probabilities your process has in the short term will change in the long term. Machines, process inputs and outputs, and single characteristics all vary, which cause their assemblies to vary as well.

To get a good picture of what your product’s overall quality looks like, try visually plotting the associated behaviors and looking at them like a picture. Such a plot helps you see immediately that every characteristic you can measure has a performance distribution.

Furthermore, you can plot behavior today, plot it again next week, and compare the difference. Comparing a single snapshot to the accumulated variation over time is an example of the change in behavior from the short term to the long term. As you can see, in the long term, the variation in the behavior of the characteristic expands. 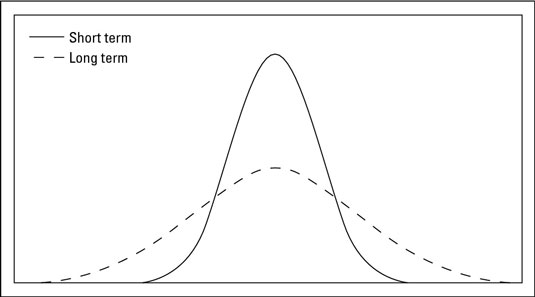 This distribution is a common occurrence. Here’s what’s happening: The probability of a defect in the short term doesn’t account for certain changes that take place over the long term. Examples include the variation among different batches of incoming material, the impact of seasonal road traffic on delivery time, and the different working styles and habits of different personnel.

Joe may be a great machine operator, but he can’t work 24 hours a day. Eventually, he has to be relieved by Jim, who works a little differently from Joe. Each one has his own performance variations, but combined they enlarge the range.