By: Stephanie Diamond and
Updated: 03-26-2016
From The Book: Content Marketing Strategies For Dummies 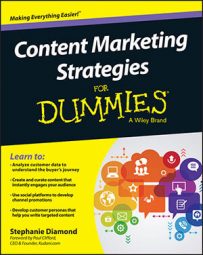 One effective way to collect information to get buy-in from your managers is to use the Five-Prong Approach (FPA). The FPA includes five types of content that will help persuade your audience.

This presentation isn't the plan itself. The plan is a significant document that needs to be carefully studied. This is the high-level presentation that you create to get buy-in to move forward and then flesh out the plan further with stakeholders. After you have made this presentation and, you hope, secured buy-in, you have to schedule meetings with the specific stakeholders who will weigh in on their particular areas of responsibility.

So what are the five content items that make up the presentation? Here they are in order:

By using the Five-Prong Approach, you share your most persuasive information as well as uncover objections to the preliminary plans.

Stephanie Diamond is a marketing professional with more than 20 years of experience building profits in over 75 different industries. A strategic thinker, she has worked with solopreneurs, small business owners, and multibillion-dollar corporations. Follow her blog at Contentmarketingtoolbox.com/blog.