How to Prepare the Final White Paper Document 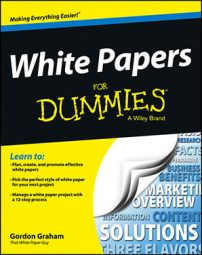 Don’t hurry through preparing your final white paper document, or you may have some embarrassing mistakes to deal with later. In this penultimate step, everyone gets involved — the writer, illustrator (if any), designer (if any), and client.

Everyone takes another look-see to make sure no last glitches turn up, and the designer fixes any final problems. Then the designer delivers all the source files and the final PDF for the white paper to the client. At the end, the white paper is finished and ready to be posted on the web.

What the illustrator does to finalize the white paper

The illustrator refines the graphics to incorporate any final comments from reviewers and sends them to the writer, the designer (if any), and the client. When the client is satisfied with the graphics, the illustrator (if outsourced) sends in an invoice.

What the writer does to finalize the white paper

The writer refines the white paper to incorporate any final comments from reviewers and sends the final text to the client and the designer. If the writer is from outside the company, he sends in his final invoice.

If the project has no designer, the writer does all the tasks assigned to the designer: Prepares the final pages in Word — or his chosen design software — and creates a draft PDF for the client to approve. If the client has any comments, the writer/designer refines the pages to incorporate these comments and then sends the client another PDF.

When the client is satisfied, the writer/designer inserts the proper keywords and metadata into the PDF for SEO purposes and (if outsourced) sends in his final invoice, which may include a separate fee for page design.

What the designer does to finalize the white paper

The designer pours the final text and graphics into pages for the white paper and creates a draft PDF for the client to approve. If the client has any comments or spots any glitches, the designer makes the required fixes and sends the client another draft PDF.

The client and designer repeat this process until everyone is satisfied with the final PDF. Then the designer inserts the appropriate keywords and metadata into the PDF for SEO purposes and sends in an invoice.

What the client does to finalize the white paper