How to Create a Storyboard for Your Marketing Video

By: Kevin Daum and Bettina Hein and Matt Scott and Andreas Goeldi and
Updated: 03-26-2016

A storyboard is a piece of paper with boxes drawn on it that show how every shot in a marketing video will be visually represented. Shots can be quite elaborate creations or simply rough sketches. The purpose is to outline each shot to see how to help the director, the camera person, and the editor put the video together.

The storyboarding process may be easier for you to complete if you think more visually than just words on a page. It isn't the order in which you create the script or storyboard that's important — it's that both elements are fully complete and detailed so that you can create an effective schedule and budget for your video.

Although software programs can help you create storyboards online, for speed and ease of use, the pen is often mightier than the computer. If you insist on using an electronic means or you simply can’t draw, the Celtx scripting software has a storyboarding feature and a free iPad app.

Still, using software can be much more cumbersome and time-consuming than simply putting pen to paper and drawing some stick figures. 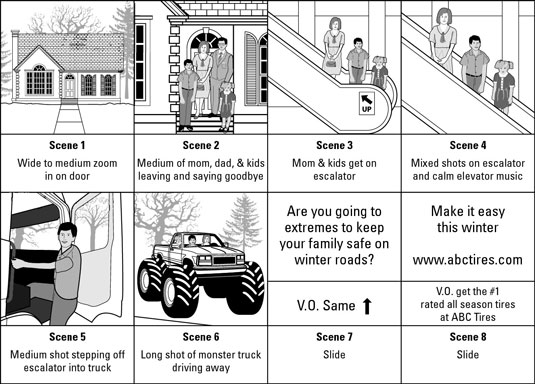 The storyboard helps you detail these actions:

A storyboard is a working document — a helpful way to quickly see how the parts of a video are assembled. Don't worry about making your storyboard a work of art. Just ensure that it accurately reflects what you want to shoot in the video in a way that other people can understand it.

A storyboard is best completed in pencil so that you can make necessary changes throughout the production process. A whiteboard can be handy for storyboarding in large groups and then simply taking a photo on your camera phone so that you can share it with colleagues. Either way, you’ll make changes along the way, so use a method that can be easily modified.

The back of the storyboard is a useful place to jot down the needs of your production team. The list gives your production manager the details needed to set up the budget and production schedule. Many of these items are already detailed in the script, but this list helps you easily identify every item and refer back to them during the production and editing phases.

You may want to fill in this information after you have completed the script or at least update it and ensure that it's complete. The list should include cast, props, costume elements, music types, and sound effects.