Managerial Economics: The Relationship between Demand, Price, and Revenue in a Monopoly

The ultimate source of power in a market, even a monopolistic market, is the consumer, who still responds to price by changing his demand level. As a consumer, you get to decide whether you’re willing and able to purchase a good at a given price.

For example, economists consider De Beers a resource monopoly because it effectively controls the world’s supply of diamonds. And although diamonds are very popular, if De Beers keeps raising its price, consumers will start substituting other precious gems, such as rubies and emeralds, for diamonds. Thus, as diamond prices increase, the quantity of diamonds consumers purchase will decrease.

The monopolist’s pricing decision is subject to the constraint imposed by consumer demand. If the monopolist charges too high of a price, nobody wants to buy its product. So, if the monopolist wants to sell more product, it must lower price as indicated by the market demand curve.

The inverse relationship between price and quantity demanded is the critical element in monopoly price setting. Because a single firm provides the entire quantity of the commodity in the market, the demand for the monopolist’s product, represented by a lower-case d, is the same as the market demand, represented by a capital D.

The market demand possesses the usual characteristics; an inverse relationship between price and quantity demanded and changing price elasticity of demand along the demand curve. In order to sell more of its product, the monopolist must lower its price, not only for the additional unit but for every other unit as well. 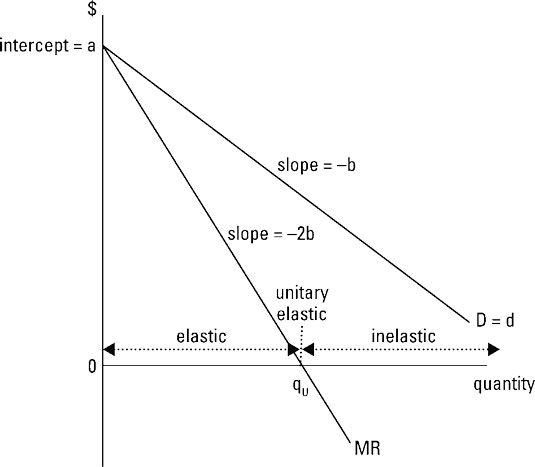 Assuming no price discrimination (charging different customers different prices for the same good), this lower price is charged for all units of the commodity sold. As a consequence, the firm’s marginal revenue curve lies below its demand curve. Marginal revenue is less than price.

A linear demand curve has the form