How to Maximize Profit with Marginal Units

Quite often it’s easier to determine the profit-maximizing quantity of output by focusing on the last unit you produce, or the marginal unit. In order to add to your profit, an additional or marginal unit of the good must add more to your revenue than it adds to your cost. In other words, marginal revenue is greater than marginal cost.

Stop at this output level because if you go beyond this point and continue to produce more, marginal cost is greater than marginal revenue — so you’re adding more to your cost than you’re adding to your revenue, and your total profit is decreasing.

In monopoly, only one firm is producing the good. Therefore, any customer who wants to buy the good must buy it from the monopoly. Thus, the demand for the firm’s product is the market demand. 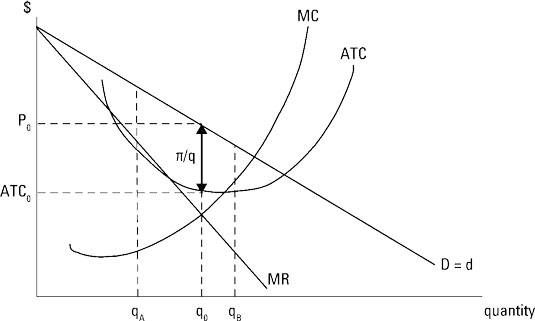 Marginal cost, MC, is upward-sloping and passes through the minimum point on average total cost, ATC.

The fact that price is determined by the point where q0 hits the demand curve emphasizes the constraint that market demand places on the monopolist’s ability to set price. If advertising increases demand — shifts the demand curve to the right — you’re able to set a higher price.

If you produce less than q0 output, for example qA, those units still add more to your revenue than they add to your cost. For those units, marginal revenue is greater than marginal cost. You increase profits by producing more output moving toward q0.

If you produce output beyond q0, such as qB, those units add more to your cost than they add to your revenue because marginal cost is greater than marginal revenue. These units reduce your profit so you should cut back production to q0.