How to Maximize Profit Using Total Revenue and Total Cost

This relationship between total revenue and quantity reflects the fact that as a monopolist, you need to charge a lower price in order to sell more output. The lower price leads to smaller increases and eventually decreases in total revenue. 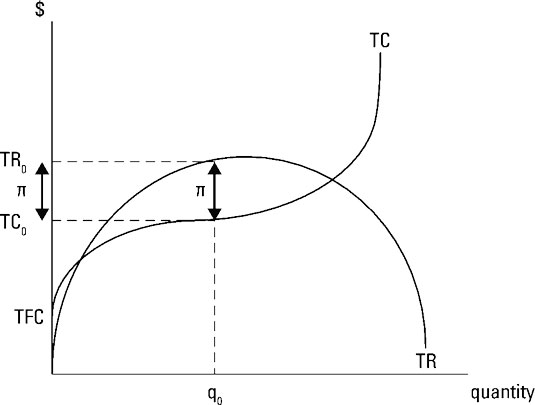 Remember that even when you produce nothing in the short run, you’re stuck with fixed costs. So at zero units of output, the monopoly’s total fixed cost equals TFC. As the quantity of output produced increases, total cost initially increases at a decreasing rate. This situation occurs until diminishing returns begin. After diminishing returns start, total cost increases at an increasing rate. That is, the total cost curve becomes steeper.

For output levels less than or greater than q0, total profit, as represented by the difference between total revenue and total cost is less than the total profit ð at q0.

Eric Corey Freed is an award-winning architect, 12-time author, and global speaker. He is a sought-after lecturer who has educated over 250,000 people on sustainability and high-performance building. Kyle J. Ritchie is the education sustainable design lead at Cannon Design in Chicago and an adjunct professor at the Boston Architectural College.