How to Discern a Consumer's Revealed Preference

One thing you can say about the relationship between preferences and the budget constraint is about the principle of revealed preference. Utility isn't measured, but things about utility can be found out by observing consumer choices and inferring from their choices the impact of price changes on their utility or welfare.

This somewhat back-to-front way of looking at things makes sense when you realize that economists know nothing about the consumer until he participates in a situation where inferences can be made regarding his behavior.

For example, suppose the government levies a tax on a good. From the consumer's perspective, it is as though the price of the good has increased and the consumer will be made worse off and hence will not be happy about the tax. The government may try and compensate the consumer by transferring a rebate to him that's equivalent to the tax revenue collected. However, the principle of revealed preference tells us that the consumer will still be worse off under the tax and rebate scheme.

This is shown in the following figure. When the consumer faces prices p1 and p2 and has an income M, the consumer optimizes by choosing the bundle (x1*,x2*). Now the government imposes a tax on good 1 so that the price becomes p1'= p1 +t.

Simplifying this expression, you can see that it is equivalent to p1x1' + p2 x2' = M. In other words, the bundle (x1',x2') lies on the original budget constraint but the consumer did not choose it. The consumer preferred (x1*,x2*). This tells you by revealed preferences that the consumer is on a higher indifference curve or level of utility with (x1*,x2*). The imposition of an income compensated tax still made the consumer worse off. 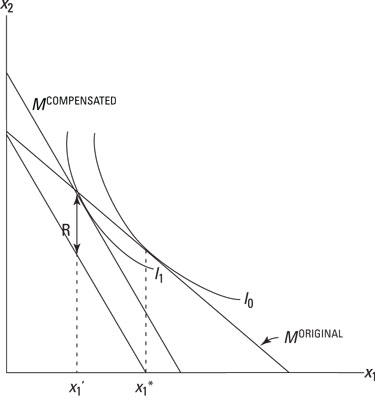 Until the consumer makes a choice, you don't really have a way of knowing her preferences for these bundles. Although you may be able to deduce the existence of A and B from what you know is available and affordable, you don't know a consumer's preference for sure. In the act of choosing to consume A rather than B, therefore, you gain information about a consumer's preferences that you didn't previously possess. Thus, you can infer that bundle A is preferred to B from the choice made by the consumer.