The diffusion of new technology introduces a crucial time element into managerial decision-making. You may be interested in how an innovation is going to affect your firm’s production costs over time. Or you may be interested in determining how diffusion occurs within your firm’s industry. Learning curve and diffusion models examine the relationship between time and technological change and provide you perspective on how technological change evolves.

The learning curve for new technology

Given the learning curve, you may want to accept short-term losses in order to gain experience in producing a product. Setting a lower price encourages greater demand for the firm’s product, resulting in increased production. The learning-by-doing associated with the increased production results in lower per-unit cost on subsequent units produced, ultimately resulting in greater profits.

By accepting an initial loss through low prices and high production, you can take advantage of the learning curve in a shorter period of time, ultimately resulting in greater profits overall.

How to model diffusion to watch developments

Iinnovations that have already been adopted by a large number of firms are more likely to be adopted by other firms due to increased information and competition.

where P(t) represents the percentage of firms using the innovation at time t. The symbol e (Euler’s number) approximates to 2.718. The parameters α and β describe the diffusion process, and they vary among innovations. The function described by the logistic curve is illustrated below. 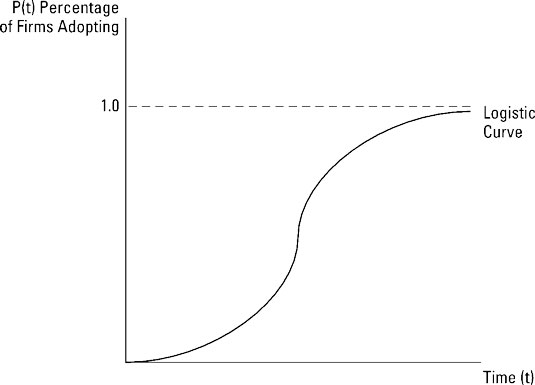 After you obtain data on the adoption of an innovation for previous years, you can estimate the logistic curve. After you estimate the curve, use it to predict the future diffusion path of the innovation. Firms have found that this technique has generated useful forecasts for the diffusion of a variety of innovations.