Efficiency in the Long and the Short Run

Economists distinguish between the long- and short-run positions of a firm. They do so because a firm can find itself, in the short run, in a number of positions where it is constrained.

It can't fully react to change immediately and therefore makes slightly different decisions than it would if there were no constraints — in other words, different than it would in the long run if it were fully capable of reacting to whatever change (pricing, technological, demand, and so on) was taking place.

Economists want to be more precise about what the terms long run and short run mean, without specifying a particular time interval (for example, a month) that will be different for firms in different industries. For example, finding an exploitable oil deposit may take longer than writing a couple lines of code.

The definition economists use is conceptually simple: In the long run, the firm is able to change its use of all factors of production — labor, capital, and land. In the short run, the firm is not able to do that; it's limited to imperfect adjustment, usually of only one factor, often labor.

As an example, imagine that a firm employs ten people to do a job working on ten machines. And suppose the wage it pays its workers has become more expensive, so that the firm would be better off employing only eight machines and eight people. But the lease for the machines is not up until the end of the year, whereas it can lay off workers at any time:

The figure illustrates this condition. Remember that a short-run marginal cost curve goes through the minimum of each of the SRATC curves, and the long-run marginal cost (LRMC) is more elastic — price and cost responsive — than in the short run. 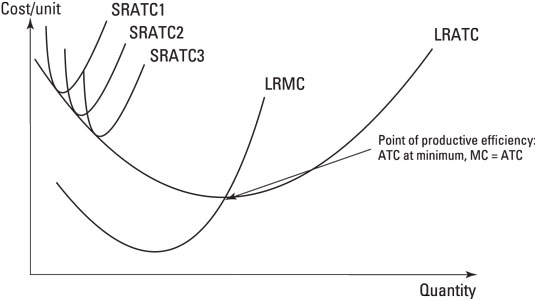 Costs in the short and long run.