Most larger companies decentralize, treating each division as its own business earning its own net income. As these different divisions do business with each other, buying and selling different products, the transfer prices they set play a critical role in determining how they’ll share profits.

Companies usually organize themselves into divisions that provide different goods or services and often do business with each other. For example, a clothing retailer may own several clothing factories; the retailer and each factory can be treated as separate divisions, sort of like companies within a company.

Suppose Jeffrey and Sandy both work for Dorothy. Jeffrey makes T-shirts that Sandy retails to customers. Each T-shirt costs Jeffrey $5 in variable costs per unit and $30,000 worth of fixed costs a year. Sandy sells each shirt to the end-customer for $10. However, to do so, she must pay an additional $1 commission per shirt, and $25,000 a year in fixed costs. Sandy expects to sell 50,000 shirts to outside customers.

At what price should Jeffrey sell Sandy the shirts? Pick a number: How about $8? The figure uses contribution margin to describe how this price impacts both divisions’ profits. Remember that the contribution-margin income statement starts with sales and then subtracts variable costs, resulting in contribution margin. Then, to arrive at net income, you subtract fixed costs. 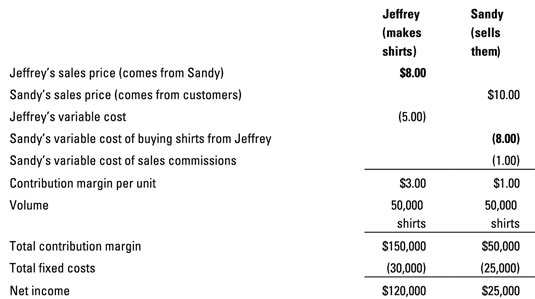 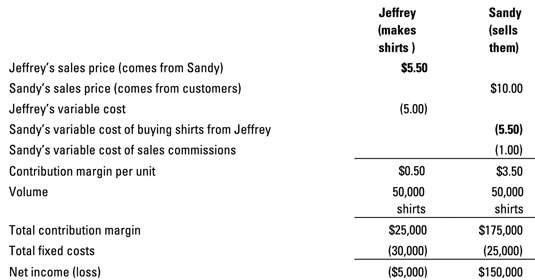 Higher transfer prices shift income from the purchasing division (Sandy) to the selling division (Jeffrey). This discrepancy may lead to some discord.