What Does It Mean To Be Transgender?

Terms such as transgender and gender identity have been in the news a lot recently. Awareness of gender diversity and transgender people has increased dramatically — in health care, in the media, and the workplace. In fact, Time Magazine’s May 29, 2014, cover story, called the current social climate the “transgender tipping point” in American society:

Despite this increased visibility in the media, a 2014 Pew poll reported that only about 8 percent of Americans are personally acquainted with a transgender person. The population is rather small — estimated a little more than 700,000 in the United States — so it’s understandable that transgender people are still a bit of a mystery.

Until you have a chance to get to know some people who identify as transgender and hear their stories, it’s natural to be confused or to have questions or concerns. Everyone has been there at one time or another! 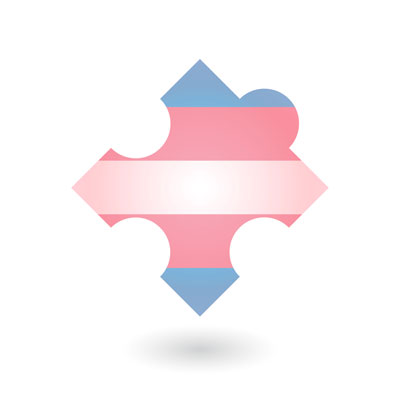 What’s the difference between sex and gender?

Before digging into what the word transgender means, make sure you've got down the basic definitions of sex and gender. People tend to use these two terms interchangeably, but the terms sex and gender refer to different characteristics about an individual. Here’s what’s really going on.

A person’s sex or assigned sex generally refers to the body’s biological make-up — including reproductive organs as well as chromosomes. Most people are assigned either male or female after a quick visual inspection by a doctor in the hospital delivery room, or even earlier through medical technology such as an ultrasound.

Courts in different states have used various criteria (e.g., the ability to bear a child, XX versus XY chromosomes, and so on) by which to make an “either/or” decision about whether a person should be considered male or female.

But sex is really not a binary classification; it just happens to be dominated by two sexes: male and female. This is true throughout nearly all known species of life. For that reason, every attempt by courts to draw a definitive line in the sand has been faulty, as many exceptions can be demonstrated for each one.

Gender refers to the set of traits and characteristics that over time have come to be assumed of (some might say imposed upon) one’s assigned sex.

But what is a man, exactly? What is a woman? Why is a man “supposed” to be out working while the woman stays home to care for the children? Why is an assertive man considered to be confident and compelling, while an assertive woman with the same type of personality is called all kinds of unflattering names?

Those assumed stereotypical characteristics about gender vary from culture to culture and from generation to generation, however. Reflecting on U.S. history, pink and red were long considered bold, passionate colors more appropriate for men (“The Redcoats are coming!”).

The more “delicate and dainty” blue was recommended for women. This color rule was reflective of the color differences often found in the animal world: the males are brightly colored in order to attract mates. The females don’t have to worry so much about what they look like, since they know the males will be interested either way.

These color assignments didn’t change until 1947, when famed designer Christian Dior initiated a pink-dominated fashion reset for women returning to homemaking after working in factories during World War II. Suddenly, anything marketed to women had to be pink. Soon after, any man who dared to like pink was eschewed.

What is gender identity?

Until as recently as the 1960s, being left-handed was considered shameful, awkward, and unnatural in some cultures, including much of the United States. Many left-handed school children were literally forced to write with only their right hands, regardless of which one was naturally dominant — sometimes even beaten or punished if they did not or could not comply.

As a result, left-handers suppressing their true nature often not only had atrocious penmanship, but tended to do poorly in school and otherwise failed to thrive. This forced compliance served to perpetuate the stereotype that lefties were somehow defective and needed to be made, well, “right.”

These days, most folks wouldn’t dream of punishing a child for favoring the left hand over the right. Everyone has a dominant hand. It's understood that most people are right-handed, but some are naturally left-handed. Some write with the left, but do everything else with the right. Others are ambidextrous, or comfortable using either hand for the same tasks. Science doesn’t yet completely understand exactly why this variance happens, but it does.

Gender identity, sometimes called affirmed gender, refers to an individual’s own psychological sense of self — who you know yourself to be. Similar to handedness, everyone has a dominant, persistent gender identity, and that identity is considered to be an immutable core psychological characteristic. It’s not a matter of preference and not something you can simply change because you want to. Just like knowing whether you are left- or right-handed, it’s hard-wired in the brain.

Borrowed from organic chemistry, the Latin prefixes cis- (“on this side”) and trans- (“across from”) are used to describe which type of gender identity someone has: cisgender or transgender.

Most people who are assigned female at birth know themselves to be women, for example, and they’re okay with that. They might not enjoy every single thing about what it means to be a woman in today’s world. (You sure can’t blame them if pantyhose is high on that list!) But overall, they’re satisfied with being women. So, for cisgender people, their gender identity is “on this side” with their assigned sex.

When one’s gender identity is “across from” one’s assigned sex, that person is in essence transgender, although they may or may not use this word to describe themselves.

The term transgender itself is used both to describe a particular type of gender identity as well as sort of a shortcut to collectively describe a whole bunch of different types of people whose genders don’t fit neatly into the M or F checkbox. Some other words you might hear are transsexual, gender-creative, bigender, trans man or trans woman, genderqueer, gender-diverse, affirmed male or affirmed female, a woman (or man) of transsexual history, non-binary, questioning, agender, and many others.

It’s impossible to define each of these different terms accurately. Like genes, individual people’s identities are as different as snowflakes, including the words they use to define their gender and what those words mean to them. Culture, race, ethnicity, and community traditions often influence the terms people use as well.

Transgender (or just simply trans) is currently the most commonly used term. But don’t assume that it works in every situation. It’s important to use whatever term(s) the person uses. Anything else is considered rude.

Along these same lines, don’t assume that everyone who is transgender addresses the situation in the same way. Being transgender doesn’t automatically mean a person needs to change anything, although most trans people tend to make at least minor adjustments to ease the anguish they’re experiencing. It could be as simple as choosing a less gendered name, such as going from Mary Ann to Jordan, or from Richard to Rey.

If the individual’s level of discomfort and distress is more intense, they may pursue more comprehensive treatment, which might include cross-sex hormone replacement therapy (HRT) and perhaps gender-confirming surgical procedures.

These procedures are considered medically necessary — life-saving, in fact — for many people. Several federal, state, local, and corporate policies now include nondiscrimination protection for gender identity, including Medicare and the IRS.

Only the individual can say for sure whether they are transgender, cisgender, or anything else — it’s not something you can decide for someone else, not even if you’re a doctor.

Nor can you simply tell if someone is or is not transgender by looking at them. Because it is such an innate thing, a lot of people might not think of themselves as somehow gender “transgressive,” even when other people might think it is very obvious. But if you ask them, they might say, “Nope, I’m not trans, I’m just me!”

On the other hand, most transgender people don’t look or act any differently than the rest of the people out there, so you’d never know that their lives’ journeys had taken a few more turns and detours than most.

What is gender expression?

Gender expression is a set of visual cues and other signals intended to help others of your species determine how to interact with you. Your gender expression is how you show the world your gender identity. Gender is expressed or presented in myriad ways. The signals can include what you wear, how you sound when you talk, how long you wear your hair, and even what you call yourself or do for a living. 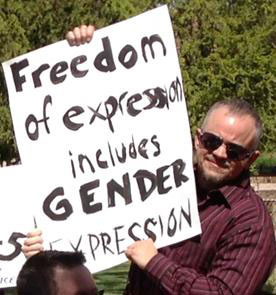 Some people have a feminine gender expression, some are masculine or manly, and some are androgynous (a little of both or none of either). It all depends on what feels right to that person in that moment. Just as sex characteristics will develop differently in each person, one individual’s gender expression is going to be a little bit different than another’s. 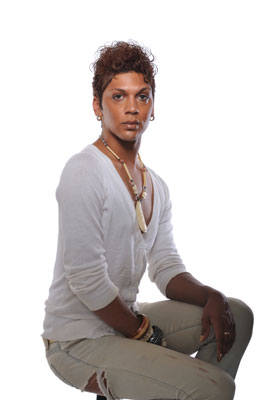 Babies are not born wearing lipstick or neckties. Nevertheless, Western society has some very rigid group-think ideas about how a person of a particular sex should look and behave. Those rules mean that a male-bodied person is supposed to consider himself a man (whatever that is), and “act like one,” too.

Ask any guy who prefers a good book over the Super Bowl how many times other people have questioned his masculinity if he admitted that fact in public: “Man up, dude! What the heck’s wrong with you?”

If the eyes see a tall, broad-shouldered person with a square jaw and the ears hear a deep voice, the brain takes that input, runs its high-speed data analysis process, and returns the results: male. The mouth then automatically wants to say “Hello, sir.”

But what if that same tall, broad-shouldered person is wearing a beautiful dress, a string of pearls, lipstick, and a tasteful dash of blush? How should you respond?

Well, if you were paying attention a moment ago, you know that gender expression helps you show the world who you are. So if in your culture women often wear beautiful dresses, pearls, and makeup, and this person is wearing all those things and introduces herself as Susan, you should say “Hello, ma’am. Nice to meet you, Susan.”

Susan is showing you (expressing) that she’s a woman with the things she can control (feminine attire, feminine name) and hoping you can ignore or at least not include those things she can’t so easily control (her height, for example). Thus, it’s appropriate and respectful to refer to her with feminine pronouns and use the name she provided when she introduced herself.