The Human Vagina and Other Female Anatomy

Understanding women's sexual (or reproductive) organs such as the vagina, uterus, and vulva is as integral to sex as understanding the penis. Demystifying female anatomy is key to good sexual functioning, whether you're a mature, experienced adult or looking to learn about women's sexual organs for the first time.

What makes women different from men is that much of our sexual apparatus is on the inside — most notably, the vagina. The vagina itself is a hollow, muscular tube that extends from the external opening at the vestibule all the way to the cervix. 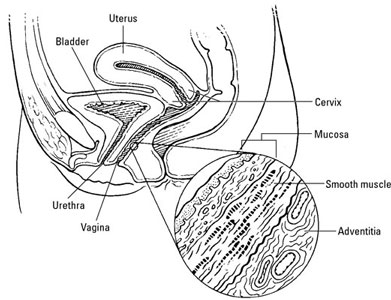 The walls of the vagina have several layers: the mucosa, which secretes various fluids; a muscular layer; and connective tissue. Beneath the vagina, on the pelvic floor, are other muscles that are responsible for keeping the vagina elevated, tight, and firm.

During intercourse, the vagina stretches to accommodate the penis. It also becomes lubricated, or slippery, by the passage of fluids through the vaginal walls. This fluid has another function besides making it easier for the penis to slide in and out of the vagina. It also changes the chemical nature of the vagina, making it more alkaline and less acidic — an environment that proves more hospitable to sperm.

The cervix and uterus

The cervix, which is the entrance to the uterus, produces a special mucus that changes according to the woman’s menstrual cycle — the monthly process of releasing eggs in preparation for possible pregnancy. Around ovulation, the mucus is abundant, clear, watery, and welcoming to sperm. After ovulation, it is thick, cloudy, sticky, and nearly impenetrable to sperm.

The uterus (or womb) has an inner cavity lined by a tissue called the endometrium, which develops and sheds regularly as part of the menstrual cycle. Menstruation occurs in response to ovarian hormones. The uterus is where the baby develops.

The ovaries and fallopian tubes

The ovaries (where eggs are stored and released, usually one each month) connect to the uterus via the fallopian tubes. A woman is born with 200,000 eggs, but by the time she reaches puberty, that number has dwindled to 400 or so.

The ovaries also release the female sex hormones, estrogen and progesterone. These hormones trigger the processes needed to create a baby. As far as the role that estrogen and progesterone play in a woman’s sexual desire, the evidence seems to tilt away from their having much of a role. Women also produce the male sex hormone, testosterone, and this may play somewhat of a role, but the evidence is not conclusive. 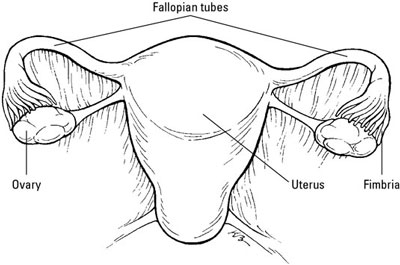 The part of the female genitals that you can see from the outside of the body is called the vulva, which lies between the mons pubis and the anus. Its various components are labeled here: 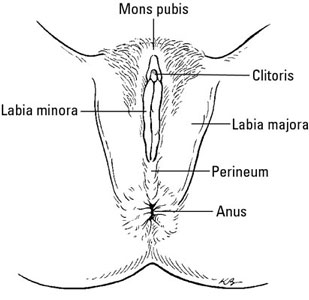 Within the vulva’s lips are the clitoris (a woman’s most sensitive spot), the urethra (from which urine is passed), and the vestibule (the actual entrance to the vagina, covered by a membrane called the hymen), all labeled in the following image. 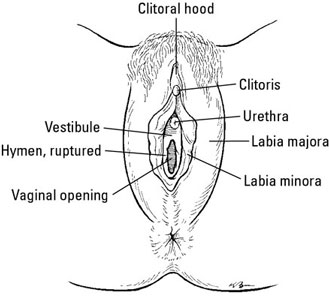 When a woman is aroused, the vestibular bulbs, which lie underneath the labia minora (inner lips), swell with blood and become engorged, somewhat like a penis — which only makes sense, because they’re made from the same spongy tissue as the penis. The clitoris (the pea-sized principal organ of female pleasure) also swells during sexual excitement.

Not all vulvas look alike, and you certainly shouldn’t be ashamed of the way your vulva looks like.