How to Deal with a Bent Penis

Explore Book Buy On Amazon
A bent penis is an erect penis that curves to one side or the other — and in most cases, it is absolutely normal. A curved penis simply can be a result of individual anatomy. If, however, your penis has a pronounced curve or bends sharply to the left or right — especially if penetration is impossible or if an erection is painful — you should see a urologist. You may suffer from Peyronie’s disease — where scar tissue develops in the penis.

The direction that an erect penis takes depends on the proportion of crus (penis under the skin) to exposed penis. Men with a shorter crus, and thus a longer penis, are more likely to have an erection that points downward, while an erect penis that has a longer crus will probably point outward, or even straight up. Sometimes the penis also bends to the left or to the right. In the vast majority of cases, the curve falls well within the norms of most men and should not be a deterrent for a relationship.

Once in a while, a man does have a more pronounced curve than most. Even the majority of these men don’t have a problem in bed, although a few may have to adjust the positions they use. 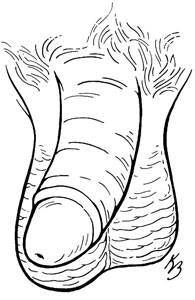 Peyronie's disease results in a curved penis.
Peyronie’s disease inflicts some men with a penis that bends so severely when it becomes erect that intercourse becomes impossible. The cause of the disease is unknown; in many instances, it arises as a result of an injury. In early stages of the disease, men usually experience pain associated with having an erection. Sometimes that pain begins before the actual curvature starts and serves as an early indicator of the problem.

How bad can Peyronie’s disease get? Bad enough for doctors to describe severe cases in which the erect penis looks like a corkscrew. On the other end of the spectrum, the bend may be very slight, not affect the man’s ability to have intercourse, and not cause any concern. In mild cases of the disease, if the man has any pain, it usually goes away on its own; all the doctor has to do is reassure the man that in two to three months all will be well.

Sometimes the curve disappears on its own. Because the disease is basically a scarring process, some men have reported positive results from taking vitamin E, although no scientific proof exists that this technique works. Surgery can sometimes remove the scarred tissue, but surgery can also result in a loss of the man’s ability to have an erection, so he would then need to have a prosthetic device implanted.

The best advice for a man who has Peyronie’s disease is to visit a urologist who can help you. Some men are so embarrassed by their condition that they refuse to get help, but urologists have helped many men with this problem, so you have no reason to be shy.

If the first urologist you consult can’t help you, look for another one. Doing so is worth the effort.

Dr. Ruth K. Westheimer is America's favorite sex therapist. Author of over 40 books and host of several TV shows on human sexual- ity, she frequently lectures around the world. Pierre A. Lehu has worked with Dr. Ruth for decades as publicist, writer, and friend.