Birth Control: How a Vasectomy Works

If a couple is looking for a permanent form of birth control, a vasectomy is a common consideration. A vasectomy is the male version of sterilization. After a minor surgical procedure, the man’s semen will no longer contain sperm, thus preventing unintended pregnancy without affecting sexual functioning or enjoyment. You may want to choose a vasectomy if you want an effective method of contraception and you are not at risk for STDs.

Vasectomies are performed on an outpatient basis. In a vasectomy, the tubes that carry the sperm (the vas deferens) are cut and tied. Only very rarely do the tubes grow back together, so that only 1 out of 1,000 men who are sterilized causes a pregnancy in the first year after the operation. 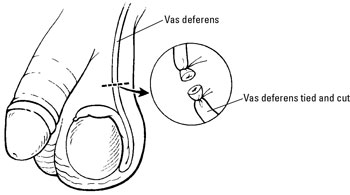 In a vasectomy, the tubes that carry the sperm are cut and tied.

One difference between the male and female sterilization is that some sperm remain in the man’s system after the operation, so you must use another method of contraception for at least the first 20 to 30 ejaculations. You can be certain that all the sperm have passed from his system by getting a simple lab test done on the semen. Ask your doctor for more details.

Some men worry that undergoing a vasectomy will in some way reduce their sexual prowess, but this fear is ungrounded. A man feels no difference in sexual performance after a vasectomy because he can still have erections and ejaculate.

The only change after a vasectomy is that, after the system has been cleaned out, the semen no longer contains any sperm. Because sperm make up only 5 to 10 percent of the volume of the ejaculate, a man who undergoes this procedure won’t be able to tell any difference, nor will his hormones be affected in any way. The testes continue to manufacture sperm, but instead of being ejaculated, the body absorbs the sperm.

Attempts have been made to create a reversible vasectomy by installing a valve instead of cutting the vas deferens, but these efforts haven’t been effective.

Researchers continue to study vasectomies and their effects. Be sure to ask your doctor for all the latest information before you agree to the procedure.

Tracy Barr has been an editor, editorial manager, writer, and consultant on several Dummies books. Katrina Carlisle, BSW, LSW, is a social worker with 14 years of experience in adoption and child welfare agencies.