By: James Gaylord and Michelle Hagen and
Updated: 03-26-2016
From The Book: Your Baby's First Year For Dummies 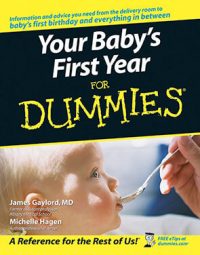 Every baby cries — some just cry more often and more intensely than others. Your infant, as intelligent as he is, doesn't have the capacity to communicate with you at this point in time except through crying. As Baby gets a bit older, you may be able to discern which cry means what — but right now, there will probably be times when you don't know why the heck this kid is crying. Hang in there. This happens to almost every parent, and it's always confusing, no matter how well prepared you thought you were to care for Baby.

Running down reasons for tears

Hunger is at the top of the list of reasons babies cry. If he's still crying after you've offered him the breast or bottle, run down this checklist to determine whether there's another fairly simple answer to his problem:

Obviously, you know how to remedy these situations. If nothing jumps up as the obvious cause of Baby's unhappiness, he may be feeling overstimulated, frightened, or just not right. Remember, his nervous system isn't fully developed, and things that wouldn't bother an adult (noise, light, a funny smell) can seriously irritate a sensitive little one.

In this case, try some of these comfort measures:

It can be incredibly frustrating when nothing soothes a crying infant. Realize that this is also normal, and that it has almost nothing to do with your abilities as a parent. As long as you're looking for the cause and not further overstimulating him, you're doing everything you can.

Your child could be more sensitive than the average infant to the world around him. As a result, an entire day's worth of stimulation — light, voices, smells, movement — may result in a volcanic crying explosion in the evening, when Baby has to let it all out.

When your frustration reaches its apex and Baby is still crying, leave him in his crib for a few minutes while you comfort yourself. All new parents find themselves feeling frazzled from time to time; walking away from the situation for a short time is sometimes the best thing you can do for yourself and for Baby. Take some deep breaths. Do some stretches, if that helps. Call a friend or your mom. Tell yourself that Baby isn't doing this to ruin your day, and that eventually, this will all pass.

An infant who cries for hours on end at specific times of the day without any obvious cause may have colic, which is an entirely different level of misery — for Baby and for you. Any parent who has dealt with a colicky baby will tell you that it's incredibly difficult, so if you suspect your child's crying is due to something other than hunger or discomfort, you have the sympathies of caregivers around the world.

Colic is loosely defined as crying that lasts for at least two hours, occurs at specific times of the day (often late in the evening), at least three times a week. This pattern usually sets in sometime during the first month. The cause is really unknown. It used to be blamed on Baby's immature digestive system roiling up in gas, and while that theory is still floating around, new theories suggest that colic is due to an infant's immature nervous system and his inability to shut out an irritating environment.

Whatever the cause, colic is harmless to your child and will usually subside completely on its own by the end of the third month. It's hardest on Baby's caregivers, who listen to the wails every day or every night.

There are some proven tips for quieting the colicky baby, including:

Most importantly, if someone offers to help with a colicky baby, accept the offer. Listening to the crying on a daily basis can wear out the most patient parent. Go easy on yourself if you find that yourself lying on your own bed crying while Baby is screaming in his crib. The old adage that parenting is the toughest job in the world was likely coined by someone with a colicky baby.

Colic can wreak havoc on your relationship with your mate. Maintain communication about the issue and give each other a break. One person shouldn't deal with a colicky infant all the time — it's not good for that parent, and it's better for Baby to have a well-rested (relatively speaking, of course) caregiver.

Dr. James Gaylord has a dual Board Certification in Pediatrics and Internal Medicine and has been in private practice in Burnt Hills, N.Y. since 1997. He is a 1988 graduate of Albany Medical College, where he also served as an assistant professor from 1993 to 1997. His training includes a residency in Pediatrics and Internal Medicine; he also spent a year (1992-93) as chief resident in Pediatrics. He continues to train medical students in his private practice.

Michelle Hagen is a freelance writer and editor and the author of 8 books. She has a degree in literature from Empire State College.