By: Rosalind Kalb and Barbara Giesser and Kathleen Costello and
Updated: 07-19-2022
From The Book: Multiple Sclerosis For Dummies 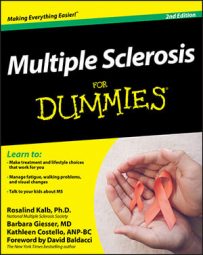 Explore Book Buy On Amazon
All eight disease-modifying medications that are approved by the U.S. Food and Drug Administration (FDA) to treat MS have been shown to be effective for people who experience relapses.

So, as long as you continue to have relapses, you’re still a good candidate for most, if not all, of these medications. However, the evidence is pretty strong that these medications have their greatest impact early in the disease, primarily by reducing inflammation in the central nervous system (CNS) and reducing the number and severity of relapses.

Some of the drugs for multiple sclerosis (MS) currently under study will no doubt turn out to be safe and effective options. Meanwhile, Novantrone (mitoxantrone) is the only one of the eight medications that has been approved for people with secondary-progressive MS whether or not they continue to have relapses. And to date, no medication has been found to be effective for primary-progressive MS. That doesn’t mean that those of you with progressive disease are out in the cold, however.

If your MS appears to be progressing significantly in spite of whatever treatments have already been tried, your neurologist may recommend a chemotherapy drug, such as Imuran (azathioprine), CellCept (mycophenolate mofetil), Cytoxan (cyclophosphamide), or methotrexate. Even though none of these medications has been specifically approved for use in MS, they appear to slow the disease course for some people.

These medications — like Novantrone — are immunosuppressants that are also used to treat various forms of cancer or to prevent transplant rejection. Because these meds work by suppressing the entire immune system (rather than selected parts of the immune system as occurs with the other MS medications), they all carry specific types of risks. These risks include infection, impaired fertility, and an increased risk of certain types of cancer.

More treatment options for progressive MS are being evaluated in clinical trials. If you’re interested in participating in a treatment trial, ask your neurologist if you would be a good candidate for any trials going on in your area. And check out the National MS Society website for more information about trials for progressive MS.

You may also hear or read about bone marrow transplantation (also called autologous stem cell transplantation because the treatment involves stem cells from your own body), which is sometimes used in an effort to control very active, progressive MS.

This is a procedure in which your immune system — including the immune cells that are thought to be causing damage in your central nervous system — is destroyed by chemotherapy or whole body radiation and is then replaced using immune stem cells from your bone marrow.

This highly invasive treatment has been studied in small numbers of people with some success. Because this procedure poses significant risks and is still experimental, it may not be reimbursable by most insurance policies.

The fact that the available medications aren’t particularly helpful for progressive MS doesn’t mean that you have no other options. On the contrary, this is the time to call in the troops. A healthcare team — particularly one at an MS care center that’s staffed by specialists — has a great deal to offer people who have more advanced disease.

Rosalind Kalb, Ph.D., Barbara Giesser, MD, and Kathleen Costello, ANP-BC, have over 80 years' combined professional experience in working with people living with multiple sclerosis. For each of them, MS was, is, and will be their chosen career.