By: Susan Schulherr and
Updated: 03-18-2022
From The Book: Eating Disorders For Dummies 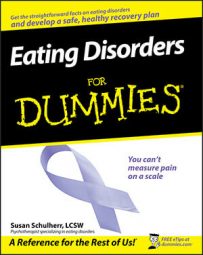 Explore Book Buy On Amazon
Do you think that you or someone you know suffers from an eating disorder? Learn what the three major eating disorders are and how they differ from less worrisome, yet still risky, eating problems.

An eating disorder can be a serious threat to your life. If you believe you might have an eating disorder, seek help from your doctor or another medical/mental health professional. In the meantime, there are online resources to help you understand more about eating disorders, and to help you or someone you love start the road to recovery.

Usually when people think of eating disorders, the first image that comes to mind is the emaciated face and body of the young woman with anorexia. Though actually the least prevalent of the major disorders — anorexia afflicts about 1 in every 100 people — it was the first to gain widespread public awareness.

Anorexia also grabs attention because it’s the most dangerous eating disorder. According to the Academy for Eating Disorders (AED), the risk of death for a person with anorexia is 12 times higher than that of someone without an eating disorder.

A person with anorexia is terrified of becoming fat — so terrified that the fear rules everything the person does. They believe they’re always on the verge of fatness, regardless of their actual weight or what anyone else tells them.

To guard against the dreaded outcome, a person with anorexia refuses to eat. The resulting weight loss can put their health and life in jeopardy.

A person with anorexia may also purge like the people with bulimia, and/or they may exercise compulsively to help control their weight.

You could most easily identify the person with bulimia by the behaviors of bingeing and purging — that is, if you could witness them. These behaviors are almost always done in secret.

Bingeing is eating lots of food in one sitting — sometimes tens of thousands of calories — often rapidly. Purging is what the person with bulimia does to get rid of these calories. They may do this by vomiting what they’ve just eaten, overusing laxatives or diuretics, exercising excessively, or other methods.

Unlike the person with anorexia, however, chances are good that the person with bulimia is also dealing with alcohol or drug abuse, and with depression. As many as 3 or 4 in 100 young women in the United States have bulimia nervosa.

People with binge eating disorder (BED) binge pretty much like people with bulimia. And they feel just as bad afterward. But they aren’t driven toward purging behaviors. More likely, they become engaged in cycling between periods of bingeing and periods of rigid dieting. For some, this keeps their weight in a normal range. Other people with BED gain weight and may even become obese.

Estimates are that anywhere from 3 to 8 in 100 people in the United States have BED. According to a 1998 survey in the Annals of Behavioral Medicine, as many as 40 percent of the people with BED are men.

Eating disorders are more common among females, but males also suffer from them, according to the Academy for Eating Disorders (AED). Women and men athletes in some sports, such as gymnastics and wrestling, are at particularly high risk for eating disorders, the AED says.

If you lined up all the people in the United States who eat, you’d have a spectrum ranging from normal eaters on one end to people with eating disorders on the other. Who’s in the middle? Most of the eating spectrum is taken up by people who don’t have formal eating disorders but who have eating habits and beliefs that are disordered.

Up to 60 percent of adult American women may be disordered eaters.

A number of online resources exist where you can find local eating disorder professionals, support groups, and residential treatment facilities.

You can also call a local hospital or university and ask if they have an eating disorders program. Such a program will be able to give you referrals. Here are some helpful organizations:

Susan Schulherr has been a highly respected psychotherapist in private practice for 30 years. She has presented to professional and non-professional audiences on weight and eating issues and has trained at the national level.