How Long Does It Take to Get into Ketosis?

Explore Book Buy On Amazon
It takes between a few days to a week of a very low-carb diet, the keto diet, before most people enter ketosis. That’s because our bodies store an “emergency” amount of carbs just in case we suddenly run out of bread and pasta.

If it’s your first time entering ketosis, you may be unsure of what to expect. Some people have symptoms that suggest ketosis, while others won’t notice any changes at all. The most common signs of ketosis for first-timers are headaches, fatigue, and muscle cramps (symptoms of the keto flu). Although unpleasant, this is a sign that you’re achieving your goal.

So, how will you know you’re in ketosis if you don’t have any symptoms? One common way to tell if you’re in ketosis is to use a ketosis urine test — it’s the same concept as the urine test women use to check if they’re pregnant, but instead you’ll find out if you’ve succeeded into getting into ketosis.

When you’re in ketosis, your urine will have a certain level of ketones (the products of fatty acids breaking down) that high-carb dieters won’t. This lets you know that you’ve reached your goal. These urine sticks are available online or at most quality nutrition stores.

You can also take a blood test to measure the same thing.

Knowing if you’re in ketosis helps you understand whether what you’re eating is correct and will give you confidence that you’re doing things correctly. It’s a great feeling to know that you’re on track to lose weight, become healthier, and reap all the other benefits of the keto diet.

The good news is that you can begin checking whether ketosis is taking place in your body only three days after starting the diet. Testing for ketosis can be done with the help of a few products.

Urinalysis testing to see if you're in ketosis

Ketone urinalysis test strips can help you quickly determine whether you’re in ketosis by testing for the presence of excess ketone bodies in your urine. The strips have a small pad which is dipped in a fresh urine specimen and changes color within a few seconds.

Here’s how to perform a urine ketone test:

Depending on the levels of ketone bodies in the urine, the pad will change from gray/beige (negative) to a deep purple (high level of ketone bodies). Any shade of purple indicates that you’re in ketosis. If you’re trying to check your ketones daily, try to stick to a specific time of day, ideally in the morning or several hours after your last meal for the best comparison.

You can purchase ketone testing strips over-the-counter at a local pharmacy, as well as online. Each bottle usually contains 100 to 200 test strips. Although urine test strips are relatively inexpensive (about 5 to 10 cents per strip), they’re also much less accurate than blood ketone meters.

Blood testing to see if you're in ketosis

Ketone blood test meters are another way to determine if you’re in ketosis by directly measuring your blood’s β-hydroxybutyrate ketone levels. 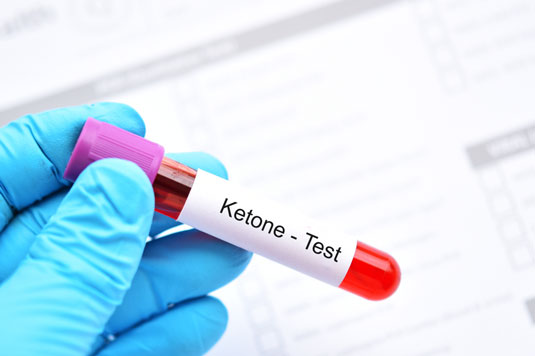 You can purchase ketone blood meters and strips at most pharmacies, as well as online. Blood strips usually cost about $1 per strip but also require a blood ketone meter, which can cost upwards of $80 (although it’s just a one-time purchase). Testing your blood is much more reliable and accurate than testing your urine.

Rami and Vicky Abrams are entrepreneurs and devoted foodies who were so impressed by how keto transformed their lives that they founded Tasteaholics.com, a leading low-carb lifestyle blog; Total Keto Diet, one of the most popular keto apps; and So Nourished, Inc., a low-carb product company, to help share its health benefits around the world.