The Pros and Cons of Fasting

By: Kellyann Petrucci and Patrick Flynn and
Updated: 03-26-2016
From The Book: Fast Diets For Dummies 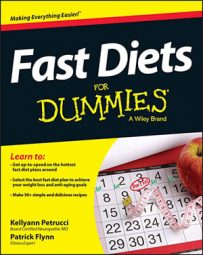 Fasting, like all dietary and lifestyle practices, has its pros and cons. What's unique about fasting, however, is that many of the cons turn to pros after you shift your perspective. For example, being hungry is only a con if you make it so. You can make being hungry a positive and productive experience just by a simple shift in your mindset.

Some of the pros of fasting include the following:

Note that all the benefits of fasting come as a drip, not a downpour, which is particularly true of fat loss, especially for those individuals who are already relatively lean. Fat loss is a slow and oftentimes tedious process. But with fasting, you can be sure of the process. It's going to happen; you just need to be a little patient.

Meanwhile, some of the cons typically associated with fasting include the following:

These cons are normal occurrences that you'll encounter as you adopt a fasting lifestyle. Most of them subside after a couple of days because the initial pains of fasting are just that — initial, not permanent.

Think of them as the dying of bad habits, or a sort of withdrawal period, if you will. In almost all cases, they completely reverse after you're fully acclimated to fasting. For instance, lightheadedness will typically resolve itself after the first week or two, as will the initial energy decline.

Not too bad, right? These cons are a very small price to pay for all the amazing benefits of fasting. You can see that the pros outweigh the cons by a considerable load.

Fasting is for normal, healthy individuals. If you have a health or medical condition, such as diabetes, you must consult with your doctor before you embark on any type of dietary and lifestyle change such as fasting.

Dr. Kellyann Petrucci, author and nutritionist, appears on various news streams nationally and conducts workshops and seminars worldwide to help people feel — and look — their best. She is also the author of the popular website www.DrKellyann.com and gives daily news, tips and inspiration on twitter @drkellyann. Patrick Flynn, a fitness minimalist, is the coauthor of Paleo Workouts For Dummies, and the driving force behind a top 500 Health and Wellness blog Chronicleofstrength.com.