What Happens to Aging Muscles

By: Brent Agin and Sharon Perkins and
Updated: 03-26-2016
From The Book: Healthy Aging For Dummies 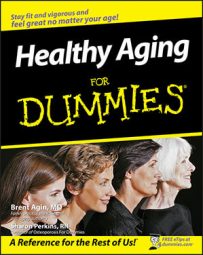 As people age, their skeletal muscle mass starts to deteriorate. Your skeletal muscles (also known as lean muscle) are the muscles that attach to your bones and are under voluntary control.

As a result of deterioration, people begin to look, well, flabby as they get older. You may see these changes start as early as your 30s, but most people see the biggest changes between their 40s and 50s.

Statistics show that people confined to bed can lose around 1 percent of muscle strength for each day in bed. Physical therapy is often prescribed as treatment for people who are bedridden so that they don't have muscle loss. A person's recovery time from being bedridden can be improved if the proper actions are taken to prevent muscle loss. Interestingly, muscle loss also affects astronauts, who spend much time in a weightless state!

• Guillain-Barre syndrome (self-limiting demyelinating polyradiculoneuropathy), which can cause short-term muscle weakness or paralysis

Other diseases affecting muscles include muscular dystrophy, congestive heart disease, liver disease, and AIDS. If you have any of these illnesses, talk to your doctor about setting up a physical therapy program to help you retain as much muscle mass as possible.

In addition to general skeletal muscle loss, the following changes occur as you age:

Brent Agin, MD, is a family physician in private practice and is also the medical director of a successful weight-loss clinic and laser medical spa. Sharon Perkins, RN, has coauthored five For Dummies books on women's health issues.