Updated: 03-26-2016
From The Book: Managing Depression with Mindfulness For Dummies

Managing Depression with Mindfulness For Dummies 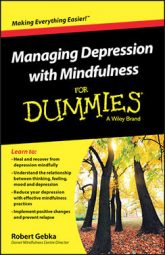 Mindfulness is now an evidence-based technique used widely for depression by the NHS (the UK’s free public National Health Service). It is also endorsed by NICE or the National Institute for Health and Care Excellence as an approved therapy for the prevention of relapse of depression.

There are numerous clinical studies which demonstrate the effectiveness of using mindfulness for people suffering from anxiety and depression.

Following is an outline of just a few of such scientific studies:

Robert Gebka, a former Zen Buddhist monk, is a mindfulness trainer and executive director of the Dorset Mindfulness Centre. He works in mental health for Dorset HealthCare NHS Foundation Trust and teaches Mindfulness Based Stress Reduction (MBSR) courses to the general public as well as business organisations. Robert is also a member of the National Counselling Society as well as the Association for Contextual Behavioral Science.