How Meditation Changes the Brain

By: Stephan Bodian and
Updated: 08-29-2016
From The Book: Meditation For Dummies 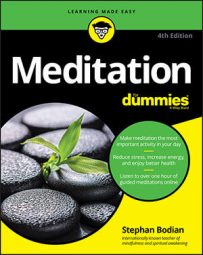 Explore Book Buy On Amazon
Armed with the latest information on how the brain works, researchers have been studying the correlations between meditation, the activation of different parts of the brain, and changes in behavior, cognition, and emotion. The results are far from conclusive — they’re more like tantalizing glimpses of a vast new terrain of exploration — but they do point to meditation’s enormous potential for furthering human psychological and neurological development by activating, integrating, and coordinating various brain regions.

No doubt this field of investigation will continue to grow in the next few decades as devices for measuring the brain become more sophisticated, and the correlation between brain regions and cognitive and behavioral functions grows more precise. If you’re curious about the latest discoveries, do an online search for “brain meditation research.”

One of the most exciting things about fMRIs is that they enable scientists to watch the brain change and grow — and grow it does under the influence of meditation!

Researchers at Massachusetts General Hospital found that study participants who took the MBSR course and practiced mindfulness meditation for about a half hour a day for only eight weeks actually grew more gray matter (the neurological material of the neocortex, or higher brain) in regions associated with attention and memory, stress management, empathy, and emotional integration. By contrast, the amygdala, the seat of stress and anxiety in the brain, shrank in size.

Now, rather than merely having the testimony of meditators who say they feel more loving, more focused, and less stressed out, scientists have measurable proof that the brain grows and changes in ways that correspond with meditators’ subjective reports.

Numerous studies have reported that meditators experience less pain than non-meditating controls. Recent fMRI research helps explain why. After just four days of mindfulness meditation training, participants in one study meditating in the presence of noxious stimulation reduced their pain unpleasantness by 57 percent and their pain intensity ratings by 40 percent.

When researchers measured their brains, they found reduced activation in regions associated with pain as well as increased activation in the anterior cingulate cortex and other areas involved in regulating and reframing emotional intensity. Not only were the meditators’ brains registering less pain, but they were also processing the sensory experience in ways that made it more bearable.

Not only does meditation grow the gray matter in the brain, it strengthens and accelerates the connections between different regions throughout the brain and slows age-related brain atrophy. Using the latest brain-imaging technology, researchers at UCLA found that subjects who meditated had white matter fibers (those involved in brain connectivity) that were more numerous, more dense, and more insulated than those who didn’t meditate.

Researchers also found that these fibers declined far less as the meditating subjects aged. The differences were particularly pronounced in white matter connecting the front and back of the cerebrum as well as the frontal cortex (the area associated with decision making, delayed gratification, and emotional regulation) and the limbic system (the locus of emotion).

These findings provide further evidence that meditation assists in regulating and modulating emotion by helping to integrate the more self-reflective and emotional areas of the brain.

Although daydreaming is sometimes associated with increased creativity, recent studies show that people are significantly less happy when their minds wander than when they’re engaged with the task at hand. Not surprisingly, brain research indicates that experienced meditators have decreased activation in an area of the brain called the default mode network, which is closely associated with the wandering mind. This decrease continues even when they’re not meditating.

Even more fascinating is the research finding that when the meditators’ default mode is active, the brain regions that govern self-monitoring and cognitive control are active, too. In other words, meditators daydream less, but when they do, they’re much more aware of it and come back more readily to present-moment awareness and the relative happiness it provides.

Rewiring the brain for success

One of the most accurate ways to focus and clarify scientific evidence is to conduct a meta-analysis of diverse studies on a particular question to determine whether and how much they agree. A recent meta-analysis of the research into how meditation shapes the brain came up with eight regions of the brain that are significantly altered in positive ways. Two regions in particular received special attention because of their impact on qualities that lead to success in business and other endeavors: the anterior cingulate cortex and the hippocampus.

Activation of the ACC improves self-regulation — the ability to purposefully direct attention and behavior, suppress impulsivity, and switch strategies flexibly and appropriately — which is crucial to effective decision making and problem solving. And growth in the hippocampus correlates with greater resilience, the ability, highly prized in the business world, to bounce back and persevere in the midst of stressful situations.

Other areas that showed positive change as the result of mindfulness practice were associated with perception, body awareness, emotion regulation, introspection, complex thinking, and sense of self.