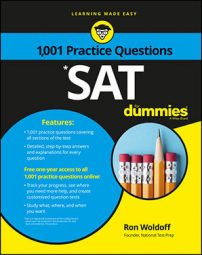 Explore Book Buy On Amazon
Some questions on the SAT Writing and Language section will test your logic and organizational skills. You will have to decide whether a passage has expressed the idea in the best way possible.

In the following practice questions, you first have to select the best sentence that links two other sentences, and then decide on the best location to insert a supporting quotation.

Questions 1 and 2 are based on the following information.

The following passage is an excerpt from Sherlock Holmes For Dummies, by Steven Doyle and David A. Crowder (Wiley).

The public was wildly enthusiastic about Sherlock Holmes, but one man didn't share that feeling. Incredibly, it was Arthur Conan Doyle himself. He had greater ambitions in mind as a writer; he believed he'd make his mark in literature by writing historical novels. (1) Doyle began to see the detective as an impediment to his work instead of as a part of it.

(A) Doyle never realized how popular Sherlock Holmes was until he killed him. (B) "I was amazed at the concern expressed by the public," he wrote in his autobiography. (C) "They say a man is never properly appreciated until he is dead, and the general protest against my summary execution of Holmes taught me how many and numerous were his friends."