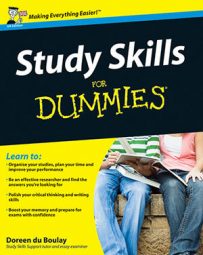 You will need to know techniques for creating a WBS for the PMP Certification Exam. Decomposition and expert judgment are the only techniques used in developing the WBS. Here is the PMBOK Guide definition of decomposition.

Decomposition. A technique used for dividing and subdividing the project scope and project deliverables into smaller, more manageable parts.

Other options include major deliverables or geography. After this level is established, it’s just a matter of taking each high-level element and decomposing it into finer levels of detail. The most common is a top-down approach.

The converse approach is a bottom-up approach, which starts with the lowest level of deliverables and works up the chart to see where deliverables naturally group themselves.

The lowest level of the WBS is called a work package, which is the level where duration and cost can be estimated reliably.

Because the WBS represents all the work in the project, you must make sure you aren’t overlooking anything! Sometimes people forget to put in “project management.” If you need a WBS to reliably estimate cost and duration, you will significantly underestimate if you leave out the project management deliverables!

You can put project management as a box in the second level down. And, this is the only branch of the WBS where you might not constrain yourself to identifying deliverables only. So much of your job is action-oriented that you might put an entry such as stakeholder management, or communication, or change management. Another option is to put the process groups under project management.

The work package is the lowest level of the WBS, but reporting progress at the work package level is probably too detailed. A large project has hundreds of work packages. You can’t report cost and schedule status for each one and then expect the sponsor or steering committee to read your report! Instead, you establish control accounts, which are where you can reasonably report progress.

Work package. The work defined at the lowest level of the work breakdown structure for which cost and duration can be estimated and managed.

Control account. A management control point where scope, budget, actual cost, and schedule are integrated and compared to earned value for performance measurement.

This WBS is arranged by phases at level 2 along with project management. You can see that the earlier work in the project is decomposed to a lower level than the work later in the project (construction, operational readiness), demonstrating rolling wave planning. 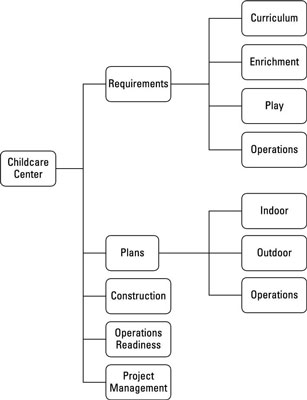 Because the WBS is deliverable-oriented, it comprises nouns, not verbs. Many people have difficulty thinking in terms of deliverables instead of actions. With practice, it gets easier: Just think in terms of nouns.

You can arrange your WBS with the project at the top level and deconstruct it downward, or you can deconstruct from left to right.

Not all branches of the WBS can be decomposed to the same level. Some work might stay at three levels because that level is where the deliverables are. Other branches might be decomposed five or six levels.

To make it easier to remember, look at these steps: