How to Deal with Answer Distractors on the PHR/SPHR Exams 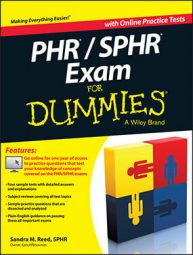 In addition to the two good answer choices, a question on the PHR or SPHR exam usually also has distractors. Distractors can show up in a couple of different places:

Dealing with the distractions isn't quite as difficult as you may think. Take at least one practice test with the specific intent to work through these steps:

Practicing this approach may take a bit of time at first. The clock eventually will matter for these practice exams, but during your practice sessions, your focus should be on training your brain to think critically through each exam item.

Here is an example of a question with distractors.

Sandra M. Reed, SPHR, is the owner of EpocHResources, a consulting firm specializing in the unique HR needs of small businesses. She has authored learning modules and case studies for the Society for Human Resource Management. She is the co-author of PHR/SPHR: Professional in Human Resources Certification Study Guide, 4E, by John Wiley & Sons, Inc.