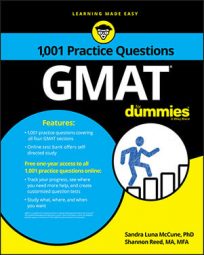 Explore Book Buy On Amazon
The Analytical Writing Assessment on the GMAT is just one question, and it appears at the beginning of your test. You are given the question prompt and then a reading passage of several paragraphs that presents an argument.

You are expected to analyze the argument for logical flaws and outline a response. Then you need to write a four- to six-paragraph essay based on your outline in which you agree or disagree with the argument, and analyze the flaws within it.

You should proofread the essay carefully before submitting it.

Read the argument and the instructions that follow it, and then make any notes that will help you plan your response. Write your response on a separate sheet of paper. If possible, type your essay on a computer or laptop. Observe the 30-minute time limit.

The following appeared in a promotional mailing sent by the publishers of a community directory, encouraging local businesses to buy an ad in the next edition:

"One of the best ways to reach new customers is also one of the cheapest. That's why it makes sense to purchase an ad in the Stipeville Business Directory! Local business owners who have purchased an ad in years past will tell you the same thing! Did you know that three of our town's top-ten doctors, two of our top-five caterers, and several of our top pet groomers bought ads last year? And we don't want to name names, but a local hairdresser forgot to place her ad before our deadline last year, and she reports that her business dropped by 5%! Well, she's buying an ad this year, and so should you! The Stipesville Business Directory is a must-buy for all local businesses!"

Discuss how well-reasoned you find this argument. In your discussion, be sure to analyze the line of reasoning and the use of evidence in the argument. For example, you may need to consider what questionable assumptions underlie the thinking and what alternative examples or counterexamples might weaken the conclusion. You can also discuss what sort of evidence would strengthen or refute the argument, what changes in argument would make it more logically sound, and what, if anything, would help you better evaluate its conclusion.

Although there is no single correct essay, the following is a well-written sample essay that will score well on the GMAT exam:

Most of us have faced a so-called "hard sell," when a salesperson reaches too far and acts too aggressively in a desperate attempt to secure our business. Unfortunately, that's what's happened with the Stipesville Business Directory's mailing as shown in the prompt. The advertisement uses faulty logic to make a flawed argument that may ultimately turn potential advertisers away from the Directory, instead of increasing sales.

The premise is wrong from the first line, which states that "one of the best ways to reach new customers is also one of the cheapest." This line of thinking doesn't make much sense, as no facts or figures are provided to show that the Business Directory is an inexpensive choice compared to other means of alerting potential customers about one's business. It also assumes that local business owners value "cheapness," which may not be true.

The ad continues to make a flawed argument with the statement that "local business owners" who bought ads in the Directory in past years will testify that doing so is "one of the best" ways to reach new customers. This argument has no meat to it since no testimonials from local business owners are included. It's possible that the Directory is more helpful for businesses like repair shops, which rely on serving customers faced with emergencies, than businesses like hair salons, which rely on repeat customers and word of mouth. But that argument is not considered here.

Perhaps the most glaring error in the ad is the assumption presented in the listing of "three of our town's top doctors, two of our top-five caterers, and several of our top dog groomers" who bought ads last year. There's no means provided of understanding what "top" means here: Are these businesses the top in a local newspaper's customer satisfaction survey or the top in money earned or some other means of measuring their success? And by what means is their success, however it is measured, tied to their participation in the business Directory? This information is not explained and thus equates participation in the Stipesville Business Directory with success as a business in a way that is not at all clear.

Additionally, this flawed logic continues with an anecdote about an unnamed hairdresser who apparently attributes her 5% drop in business to not purchasing an ad in the Stipesville Business Directory. This is flimsy evidence, and without knowing more about the hairdresser, we cannot be sure that the drop in her business is related to her failure to place an ad in the Directory. Her business might be located in an area of Stipesville where construction has taken place over several months, causing a decrease in visitors. Or she might have taken a vacation of a month or more, during which time her business would obviously see a decrease in earnings.

The shoddiness of the arguments presented ends up making the Stipesville Business Directory seem like an organization that's overaggressive and abrasive, which is unfortunate. The inclusion of more detailed testimonials from satisfied local business owners who bought ads would provide more convincing, if anecdotal, evidence. The Directory's compilers might also try to accrue more convincing figures, perhaps by surveying local businesses before and after they've placed ads. This sort of information, presented coherently, would ultimately be much more convincing to local business who are on the fence about placing an ad in the Stipesville Business Directory.

This essay would likely score a 6 (out of 6) on the GMAT. It fulfills the prompt by considering and explaining the questionable assumptions that underline the speaker's principal argument, and showing how or why those assumptions are unconvincing in a piece of writing that seeks, above all, to convince. The essay is well organized and moves smoothly, using transitions between ideas well, working down the advertisement in a way that makes natural sense. The writer also proposes alternative ways that the ad could be written to make it more convincing. While the tone of this essay borders on being too harsh, the case made here is very convincing.