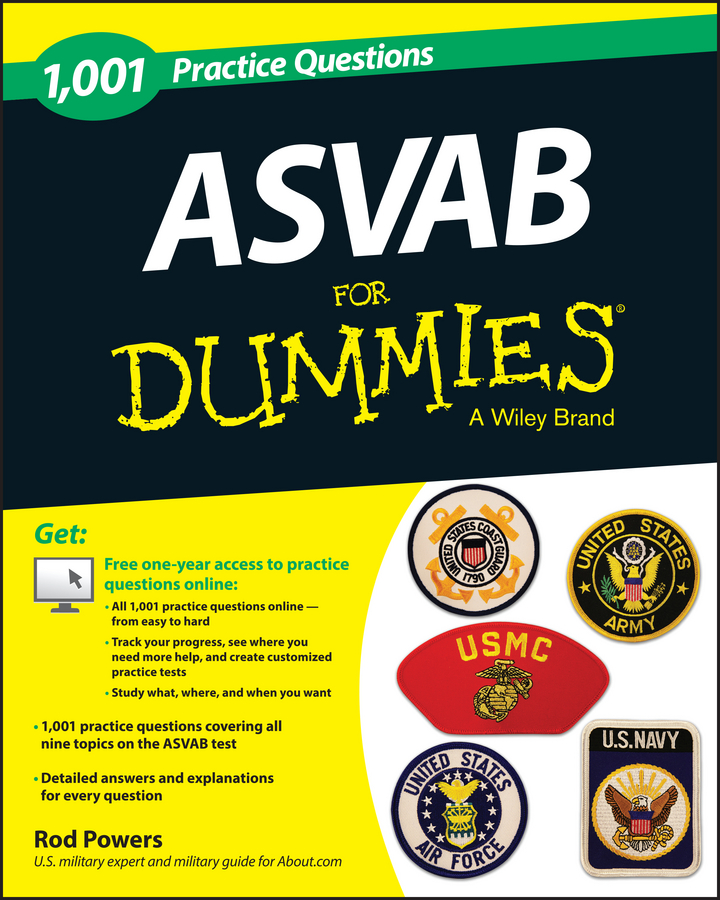 Explore Book Buy On Amazon
The ASVAB wants you to know how machines can simplify your work. In addition to increasing efficiency, machines are also used to help with work that couldn’t be done otherwise. Think of the mechanisms and machines you use every day — from the simple to the more complex. You could move most doors out of the way without hinges, but you couldn’t lift a car over your head without some help.

Machines give you the ability to magnify and change the direction of forces. When a machine multiplies the force you use, it gives you a mechanical advantage. This concept can be stated as

Some simple machines may give you a mechanical advantage of only 1 or 2. This means that they enable you to do one or two times the amount of work by expending the same effort. But those simple machines are still worth using! Often, even if a machine doesn’t multiply your effort, it can at least spread your effort out and make it more effective.

Machines make work easier by providing some trade-off between the force applied and the distance over which it’s applied. Keep reading to find out more on some basic types of machines.

Using levers to your advantage

You may not think of the seesaw at the neighborhood park as a machine, but it is. It’s a lever. Levers are among the simplest machines used to help increase force.

To determine how much a lever reduces the amount of effort needed to do work, use the following formula:

The mechanical advantage of using a lever can be stated as

Ramping up the inclined plane

The inclined plane, also called a ramp, is another very simple machine that makes moving an object from one point to another easier. The ramp spreads your work out over a longer distance, so less force is needed to do the work.

For instance, suppose you have to lift a 50-pound barrel to a truck bed that’s 3 feet off the ground. You would have to use 50 pounds of force for 3 feet to move the barrel. But if you put a 6-foot ramp in place and push the barrel up the ramp, you’d only use half as much force to get the barrel in the truck (assuming there’s no friction) because the mechanical advantage of such a ramp is 2.

The advantage of using a ramp can be expressed as

Wedges are a form of inclined plane and can multiply your effort in much the same way as a ramp can. Screws are also inclined planes, only in spiral form. Screw jacks, which you can use to lift your house up to build a new foundation, are a combination of a lever and an inclined plane.

Multiplying your effort: Wheels and axles

The wheel-and-axle machine multiplies the effort you use, producing a greater force. When you steer a car by using a steering wheel, a little effort exerted on the steering wheel turns the wheels of the car in the direction you desire. Turning your car wheels would be a lot more complicated if you didn’t have the steering wheel.

In true wheel-and-axle machines, the wheel and the axle are fixed together and turn at the same time. This arrangement multiplies the amount of force you can exert by a considerable amount.

Getting a grip on things with vises

Although many mechanisms are designed to transmit motion, some machines have the purpose of keeping things motionless. Vises are very useful because they can close around items and hold them with great force. 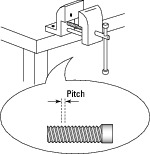 Rotating the handle on the vise causes a screw to turn, which either tightens or loosens the vise. A screw is a cylinder wrapped in a continuous spiral. The distance between the ridges of the spiral is called the pitch of the thread. The greater the pitch of the thread, the farther the jaws of the vice move for each revolution of the handle. However, there’s a trade-off. Larger pitches require more force to rotate the handle than screws with smaller pitches do.

A hydraulic jack uses a nearly incompressible liquid, such as oil, to exert force in order to move an object. As the handle moves, it applies pressure to the oil. Because the oil doesn’t compress, the oil transmits whatever force is applied to it to the work cylinder with no (or little) loss in efficiency. The mechanical advantage is the ratio between the diameters of the two cylinders. 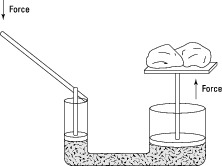 The small cylinder has a diameter of 1 inch and the large cylinder has a diameter of 4 inches. This difference in diameter results in a mechanical advantage of 4. If the rocks weigh a total of 100 pounds, only 25 pounds of force has to be applied to the piston in the small cylinder in order to lift the load. However, although the force required is reduced by a factor of 4, the smaller piston has to move 4 feet for every foot the piston in the larger cylinder moves.