Pulleys and gears are simple machines that you need to know for the ASVAB Mechanical Comprehension subtest. They can be used to change the magnitude and direction of force. When you ride in an elevator, step onto an escalator, drive your car, or wind your watch, you’re using pulleys and gears.

When used in a block and tackle arrangement, pulleys make lifting heavy objects easier. In block and tackle systems, pulleys can also be used to change the direction of your pull. If you tie a 200-pound crate to one end of a rope, run the rope through a pulley, and grab the other end of the rope, you can pull down on the rope to lift the crate up.

Without a pulley, you could pull down on the crate all day, and it wouldn’t go up. In this case, using a simple pulley, the force of your pull must equal the weight of the object being lifted. The regular pulley doesn’t multiply your force, but it makes the process of lifting easier. 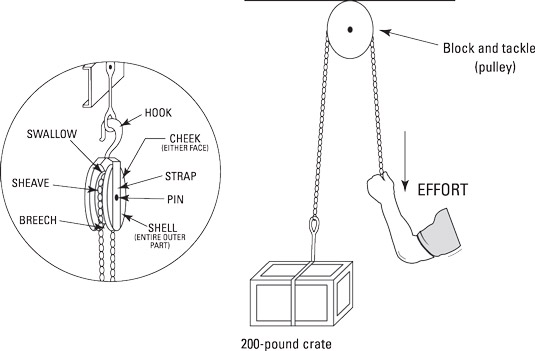 A pulley used in a block and tackle system.

Using a block and tackle allows you to distribute your force more effectively. Instead of hoisting that entire 200-pound crate in one try, you can pull on a rope to lift it a few inches at a time. This makes the work easier to perform.

A block and tackle system can also be used to reduce effort by magnifying force: 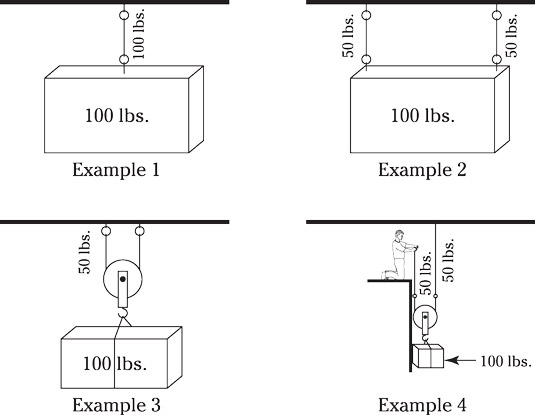 Reducing effort by using a block and tackle.

The motion of gears with an even number of gears aligned in a series.

The speed at which a gear rotates depends on the number of teeth. Gear 1 has six teeth, and Gear 2 has eight teeth. This relation of teeth can be expressed as a ratio of 6:8, which can be reduced to 3:4. That means Gear 1 has to rotate four times in order for Gear 2 to make three revolutions. Or expressed another way, for each rotation made by Gear 1, Gear 2 will make three-quarters of a revolution. 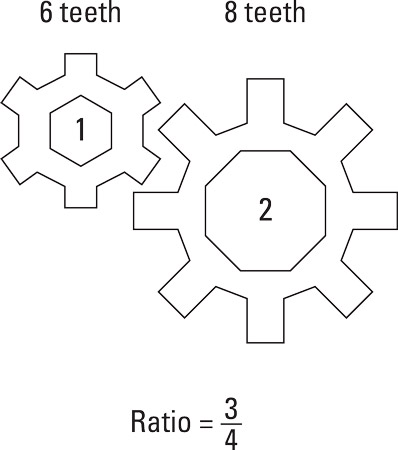 The ratio of teeth between two gears affects rotational speed.

When gear shafts aren’t parallel to one another, bevel gears can be used to connect gears that have shafts at different angles. The principles of gear rotation remain the same. Here’s an example of bevel gears designed to connect shafts having a 90-degree angle to the other. 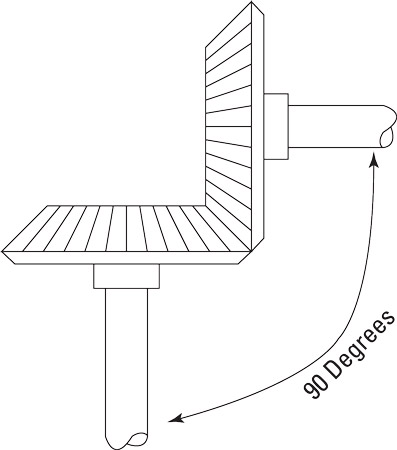 When connected by a system of belts, pulleys can also drive other pulleys.

Like gears, pulleys are used to transmit motion from one location to another. However, the physical properties of pulleys are different from those of gears: