Explore Book Buy On Amazon
A root is a word part that serves as the base of a word. If you recognize a root, you can generally get an idea of what the word means, even if you're not familiar with it.

The Word Knowledge subtest of the ASVAB AFQT will test your knowledge of root words, so if you're unsure, the following vocabulary exercises will help you find out beforehand whether you should do some extra prep.

The following chart contains a series of words. It's your job to find the root of each word, guess what the word means, and look it up in the dictionary (or save some time and just check out the definitions under "Answers and explanations"). 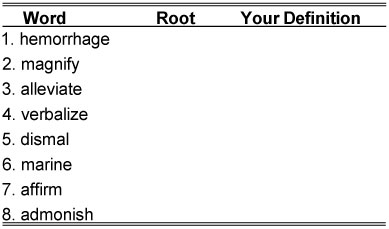 Angie Papple Johnston joined the U.S. Army in 2006 as a CBRN specialist. Currently, she's the CBRN noncommissioned officer-in-charge of an aviation battalion in Washington, D.C. Rod Powers served more than 20 years in the U.S. Air Force and retired as a first sergeant.