And you can generalize that into three dimensions like this:

And here’s the 3D Schrödinger equation using the Laplacian:

To solve this equation, when the potential doesn’t vary with time, break out the time-dependent part of the wave function:

is the solution of the time-independent Schrödinger equation, and E is the energy:

So far, so good. But now you’ve run into a wall — the expression

So what should you do? Well, you can focus on the case in which the equation is separable — that is, where you can separate out the x, y, and z dependence and find the solution in each dimension separately. In other words, in separable cases, the potential, V(x, y, z), is actually the sum of the x, y, and z potentials:

Now you can break the Hamiltonian in 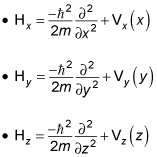 When you divide up the Hamiltonian as in

Where X(x), Y(y), and Z(z) are functions of the coordinates x, y, and z and are not to be confused with the position operators. This separation of the wave function into three parts is going to make life considerably easier, because now you can break the Hamiltonian up into three separate operators added together:

So you now have three independent Schrödinger equations for the three dimensions: 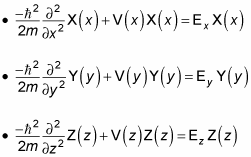