In physics, just as you can use formulas to calculate linear velocity, acceleration, displacement, and motion, you can also use equivalent formulas for angular (rotational) movement.

You can think of the angle, theta, in rotational motion just as you think of the displacement, s, in linear motion. This is great, because it means you have an angular counterpart for many of the linear motion equations. Here are the variable substitutions you make to get the angular motion formulas:

The table compares the formulas for both linear and angular motion. 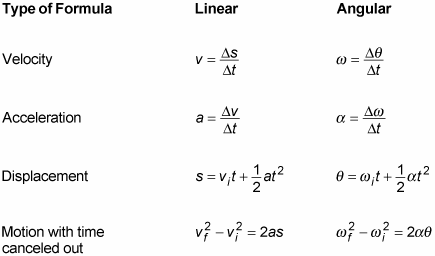 Say, for example, that you have a ball tied to a string. What’s the angular velocity of the ball if you whirl it around? It makes a complete circle,

in 0.5 seconds, so its angular velocity is

Another demonstration of the usefulness of radians in measuring angles is that the linear speed can easily be related to the angular speed. If you take the equation

And multiply both sides by the radius, r, you get

is simply the distance traveled by an object moving in a circle of radius r, so this equation becomes

You may recognize the right side of this equation as the equation for speed. So you can see that linear speed and angular speed are related by

2 seconds, what would its average angular acceleration be? Work it out by plugging in the numbers: