The Origins of the Universe Glossary

By: Stephen Pincock and Mark Frary and
Updated: 03-26-2016
From The Book: The Origins of the Universe for Dummies

The Origins of the Universe for Dummies 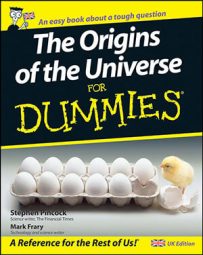 Anisotropy: The variation of a physical property, depending on the direction in which it’s measured. For example, the temperature of the cosmic microwave background radiation is anisotropic.

Baryon: The family of heavy subatomic particles, which includes protons and neutrons, that interact through the strong nuclear force.

Big Bang: The widely accepted theory that says the universe started expanding roughly 14 billion years ago from an extremely dense and hot state.

Black hole: An object with such a strong gravitational field that nothing inside it can escape, including light.

Boson: Force-carrying fundamental particles, such as the photon (electromagnetic force) or the W and Z bosons (weak force).

Cosmic microwave background (CMB): The cooled remnant of the Big Bang, this microwave radiation fills the entire universe and can be observed today with an average temperature of about 2.725 kelvin.

Dark energy: A mysterious energy, thought to make up 70 per cent of the universe, which causes the universe to expand more and more quickly.

Dark matter: Unknown substances that are detectable in space by their gravitational effects, but which don’t shine like normal matter.

Doppler effect: The process by which the frequency or wavelength of light or sound seems to be altered by the motion of its source relative to the observer.

Electron: A light fundamental particle with a negative charge.

Fundamental particle: A particle, such as the quark or electron, which scientists believe cannot be subdivided further.

Galaxy: An enormous system containing billions of stars, plus vast amounts of dust and gas; the Milky Way, for example.

Hubble constant: The ratio of the speed with which galaxies are moving away (receding) from an observer to their distance from us, due to the expansion of the universe.

Nebula: A cloud of gas and dust in space that may emit, reflect, and/or absorb light.

Neutrino: A fundamental particle that has no electric charge and very little mass. It can pass through whole planets or stars without interacting with other particles.

Neutron: One of the baryons that make up atoms. Neutrons have no electrical charge and are made of one up quark and two down quarks.

Neutron star: The collapsed core of a massive star that remains after a supernova explosion. The remaining matter is compressed so tightly that negatively charged electrons and positively charged protons are forced together.

Planet: A large, near-spherical object that orbits a star.

Proton: A baryon found in the nucleus of every atom. Made of two up quarks and one down quark, a proton has a positive charge.

Pulsar: A fast-spinning, dense neutron star that emits light, radio waves, and/or X-rays in beams like the light from a lighthouse.

Quantum: The smallest possible unit of something that can exist.

Quark: The family of fundamental particles that combine to make baryons. Quarks come in six flavours: up, down, charm, strange, top, bottom.

Quasar: The bright centre of an active galaxy, probably fuelled by an enormous black hole that swallows matter.

Red-shift: An increase in the wavelength of light or sound. In the case of distant galaxies, this increase is caused by the expansion of the universe.

SETI: The search for extraterrestrial intelligence.

Solar system: The Sun and all the celestial bodies that orbit it, including the planets and their moons, asteroids, comets and so on.

Star: A large mass of hot gas held together by its own gravity and fueled by nuclear reactions.

String theory: Theory of the universe, which says that the fundamental ingredients of nature are but tiny one-dimensional filaments called strings.

White dwarf: The remnant core of a star that has exhausted its nuclear fuel and settled into a solid ball of matter.

Stephen Pincock has been writing about science for the past 15 years, after finishing a degree in Microbiology at the University of New South Wales, Australia, and realising that while the whole science thing is utterly fascinating, he was less than eager to spend the rest of his life peering down a microscope.
Stephen’s currently a regular science contributor to The Financial Times and The Lancet among many other publications, and is the international correspondent for The Scientist. For quite a while he was an editor at Reuters Health.

Mark Frary is a science and technology writer. He studied astronomy and physics at University College London, writing a dissertation on the production of positronium. While there, he worked at the Mullard Space Science Laboratory on atmospheric plasma physics. After completing his degree, he moved to Geneva and worked on the OPAL experiment at the European particle physics laboratory CERN.
Mark co-wrote the book You Call This The Future?, a look at the 50 best sciencefiction gadgets ever conceived and how they have become reality. He lives in Ampthill in Bedfordshire with his wife and two children.
Mark and Stephen are the authors of Codebreaker: The History of Secret Communication.