By: Frank Amthor and
Updated: 09-11-2016
From The Book: Neuroscience For Dummies

Explore Book Buy On Amazon
A crucial aspect of neuronal function is their unique use of electricity. They use electricity both to secrete their neurotransmitters and for computation. Here's how.

The membrane of the neuron contains a special kind of ion channel that is actually an active pump for ions. Ions are the charged atoms that are dissolved in fluids inside and outside the cell. The most important ions are the chloride salts of sodium (NaCl), potassium (KCl), calcium (CaCl2), and magnesium (MgCl2), which dissociate when dissolved into the cations Na+, K+, Ca++ and Mg++, and the anion Cl–. Note: A cation is positively charged (attracted to a negative cathode); an anion is negatively charged (attracted to a positive anode).

The fluid outside cells and in our blood actually has about the same ionic constituency as seawater, that is, mostly Na+, much less K+, and even less Ca++ and Mg++, with Cl– being the major anion. However, the ion pumps in neural membranes, called sodium-potassium ATPase pumps, actively pump sodium out of the cell and potassium in, in this ratio: 3 Na+ out to 2 K+ in. 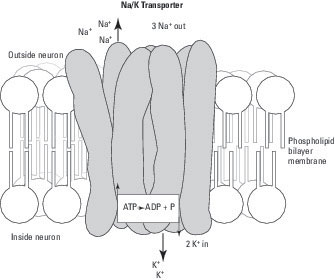 These pumps run all the time, creating a situation in which very little sodium and an excess of potassium exist inside the cell. However, because not as much potassium goes out as sodium comes in, there is a net negative charge inside the cell due to the deficiency of positive ions.

The actual voltage you measure with an electrode placed inside the cell (compared to the outside) is determined by the leakage conductances for the various ions. The potassium ion has a much larger leakage conductance than that for sodium, resulting in a measured membrane potential of about –70 millivolts. Because this voltage is measured across the neuron's membrane (from inside the neuron to outside), it is called the membrane potential.

The membrane potential of a neuron can be changed by ion channels in its membrane. This is where the ionic concentration imbalances matter because when neurotransmitter receptors open channels for particular ions, the ions flow through these receptors in the direction of restoring the imbalance set up by the sodium-potassium pumps.

The flow of ions is a current that causes the voltage across the membrane (membrane potential) to change accordingly. The fast, excitatory neurotransmitters glutamate and acetylcholine, for example, bind to receptors that allow sodium ions to go through the channel pore. This entry of positive ions can locally reduce and even reverse the polarity of the negative potential inside the cell. This transient polarity change is called depolarization.

Ionotropic inhibitory receptors are those that bind either GABA or glycine and open channels permeable to Cl– (metabotropic GABA receptors open, via second messengers inside the cell, channels for K+ that also inhibit or hyperpolarize the cell). If Cl–, which is negative, enters the cell, it can make the interior more negative, which is called hyperpolarization. When ion channels for K+ are opened, K+ actually goes out of the cell because of its higher concentration inside than outside the cell, and the cell also hyperpolarizes.

Now you can see why a single neuron can be so complicated. Some 10,000 excitatory and inhibitory synapses are opening and closing constantly in response to all the various presynaptic inputs, leading to a constantly changing net potential across the cell membrane that is the summation of all this activity.