What Are Photosynthesis and Respiration?

Environmental scientists recognize that the fundamental source of energy for most life on earth is the sun. Through photosynthesis, plants capture the light and convert it into chemical potential energy. Plants then store the potential energy in the form of biomass (biological matter that fuels nearly every animal on earth).

Only after an animal eats the plant is the potential energy from the sunlight released as kinetic energy for movement and growth.

Photosynthesis is the chemical process by which green plants convert sunlight into sugar. In essence, this process transforms a wave of light energy into chemical potential energy, which the plant then stores in the molecular bonds of sugar molecules.

The following steps walk you through the photosynthesis process that occurs each time the sun’s light reaches the leaves of a plant:

The following equation sums up the photosynthesis reaction:

Through this process, green plants capture energy from the sun, use some of it to function and grow, and store some of it in their plant structure, where it’s available to other organisms when they eat the plants. At the same time, the plants release oxygen into the atmosphere.

According to NASA, of all the sunlight that reaches earth, only about 48 percent of it hits the surface and only a portion of that is captured through photosynthesis. The rest is reflected back by earth’s atmosphere or absorbed by the atmosphere.

Photosynthesis is the first stage of energy flow through an ecosystem. You and all other animals on earth rely on the energy that plants store for life. But animals aren’t the only organisms that burn energy. Plants burn energy as they grow, too. In both plants and animals, the process of respiration — which releases stored energy for use — occurs in the mitochondria inside each cell.

Chemically speaking, respiration is photosynthesis in reverse, as you can see in this equation:

Respiration consists of a complicated series of chemical reactions. In the first stage, glucose is oxidized, and the chemical potential energy of its bonds is transferred to the chemical potential bonds of an ATP molecule. The ATP molecule can then be transported throughout the cell where its stored energy is used to complete various tasks within the cell. This process releases carbon dioxide gas and water.

Respiration occurs in your cells and is fueled by the oxygen you inhale. The carbon dioxide gas you exhale is the result of a completed cycle of cellular respiration.

Only plants can photosynthesize, but both plants and animals depend on respiration to release the chemical potential energy originally captured through photosynthesis.

The figure illustrates how closely photosynthesis and respiration are linked. As you can see, thanks to these two life-sustaining processes, plants and animals depend on each other to survive. 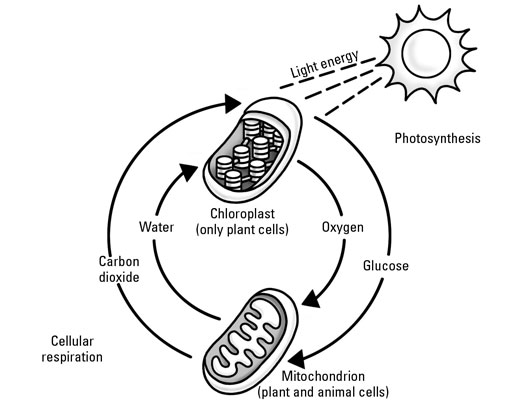